With close to half of the public's 6,500 votes, a team from Mexico has been selected as the winning group of the World Standards Day video competition. World Standards Cooperation members—the International Electrotechnical Commission (IEC), the International Organization for Standardization (ISO), and the International Telecommunication Union (ITU) —served as the coordinators of the challenge, which called for contestants to submit videos showing something that would not work or would be much more difficult without the support of international standards.

The four winners submitted an animated video titled "Signs Matter" that depicts how, in a world without graphic symbols, certain situations would be much more difficult. The team was selected from a pool of 132 submissions (see the finalist videos here). Symbols, much like standards, represent a common language understood across the globe.

As ISO reports, other finalists submitted videos that covered clothing sizes to interoperability of parts, to efficiency and safety. The winning team will receive 1,500 Swiss francs.

World Standards Day was initially launched in 1970, and is now recognized and celebrated by nations around the globe. U.S. activities are organized annually by a planning committee consisting of representatives from the standards and conformity assessment community. The U.S. Celebration of World Standards Day will be held at the Fairmont Hotel in Washington, DC, on October 1, 2015.

The event will include the presentation of the 2015 Ronald H. Brown Standards Leadership Award, which is named after the late U.S. Secretary of Commerce and honors an individual who has effectively promoted standardization as a key tool in the elimination of global trade barriers. This year, the winner is electronics engineer and musician James Williamson. The results of the 2015 World Standards Day Paper Competition will also be announced.

The Consumer Electronics Association (CEA) is the event's 2015 administrating organization. The event is co-chaired each year by the American National Standards Institute (ANSI) and the National Institute of Standards and Technology (NIST). 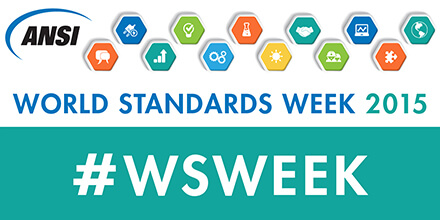 Get #Social during World Standards Week!