ANSI Board Names Volunteer Leaders for 2016

The American National Standards Institute (ANSI) Board of Directors has announced its new members and officers for the term beginning January 1, 2016.

Kevan Lawlor, president and CEO of NSF International, was appointed for a second one-year term as ANSI's chair of the board.

Arthur Cote, P.E., supported by NFPA, will continue in the role of immediate past chairman.

The following individuals have been elected to the Board as directors-at-large for terms beginning January 1, 2016:

In addition, the Board of Directors Nominating Committee has filled four director-at-large vacancies for terms beginning January 1, 2016:

Individuals retiring from the Board at the end of 2015 include: 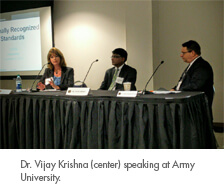