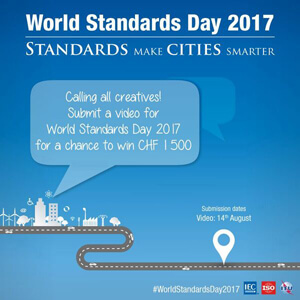 Competitors are asked to get creative and illustrate how international standards help make cities smarter in a video that is no longer than 15 seconds. IEC, ISO, and ITU will select the top-10 videos based on several criteria, including:

The annual video contest commemorates World Standards Day (WSD), which launched in 1970 and takes place on October 14. WSD pays tribute to the collaborative efforts of the thousands of experts worldwide who develop the voluntary technical agreements that are published as international standards. The video competition winner will receive cash prize of 1,500 Swiss francs (approx. $1,500 USD), and the three runners-up will receive 500 Swiss francs (approx. $500 USD).