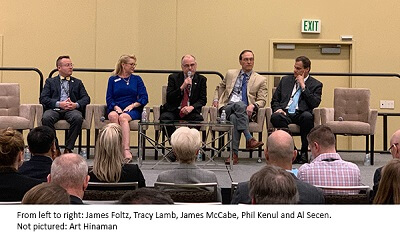 Voluntary consensus standards are critical to the integration of unmanned aircraft systems (UAS)also known as dronesinto the national airspace system. The fourth Federal Aviation Administration (FAA) UAS Symposium, held June 5-6, 2019, in Baltimore, echoed this theme in a number of sessions, which drew over 1,000 attendees and included a panel discussion on "UAS Standards - Supporting Safety through Standards."

Moderated by Art Hinaman, manager, technical operations at the FAA UAS Integration Office, the standards session included other perspectives from government and industry representatives. James Foltz, manager of programs and procedures at the FAA Aircraft Certification Service, noted the important contribution that standards make to research and agency rulemaking, pursuant to the National Technology Transfer and Advancement Act of 1995 and OMB Circular A-119. Tracy Lamb, vice president of regulatory and safety affairs and chief pilot, Association for Unmanned Vehicle Systems International (AUVSI), described AUVSI's Trusted Operator ProgramTM (TOP) under which drone pilots can demonstrate that they possess a level of knowledge and proficiency exceeding the minimum required by FAA for different types of flight operations.

The ANSI UASSC will launch a version 2 revision to its standards roadmap with a kickoff meeting on September 12, 2019, in Washington, DC.

How to Get Involved

The UASSC draws participation from industry, government agencies, standards developing organizations, and other interested stakeholders. Participation is open to UAS stakeholders that have operations in the U.S. Membership in ANSI is not a prerequisite and there is no fee to participate at this time.

For more information, and to become involved, visit www.ansi.org/uassc.

What is an American National Standard Anyway? Register for Free ANSI Webinar