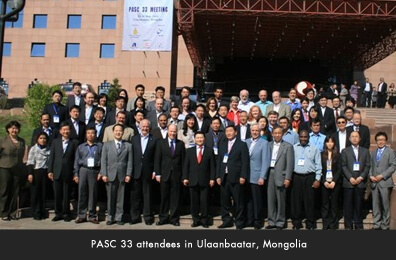 The Pacific Area Standards Congress (PASC) held its 33rd meeting on May 29-30, 2010, in Ulaanbaatar, Mongolia. The American National Standards Institute (ANSI) participated alongside 13 other national standards bodies, as well as the Secretary-General of the International Organization for Standardization (ISO), the president of the International Electrotechnical Commission (IEC), and representatives from the United Nations Industrial Development Organization (UNIDO) and the International Telecommunications Union (ITU).

Gary Kushnier, ANSI vice president of international policy, led the eight member U.S. delegation, which included private and public sector members of the Institute. The meeting was officially opened by Mongolia's first deputy prime minister, Norov Altankhuyag, and was hosted by the Mongolian Agency for Standardization and Metrology (MASM). MASM first joined PASC in 1994, and this was their first time hosting the Congress.

Increased business engagement in standards and conformance has been a continuing goal to grow trade and investment throughout the Pacific region. Jennifer Stradtman of the U.S. Department of Commerce's International Trade Administration reported on the Asia-Pacific Economic Cooperation (APEC) Sub-Committee on Standards and Conformance (SCSC) Business Engagement Conference, which was held in Singapore in August 2009. [see related article] PASC 33 attendees expressed satisfaction with the increased awareness of standards among business leaders and their support of continuing and productive interaction with business. All PASC members were encouraged to suggest topics for future projects and initiatives for increasing interaction with business.

A presentation made by Ajit Jillavenkatesa, Ph.D., of the National Institute of Standards and Technology (NIST) inspired considerable discussion on the development of standards in new and emerging areas of technology, such as Smart Grid, energy efficient products and systems, and nanotechnology. PASC members suggested that the development of standards in emerging technologies is only part of the process, and that plans for raising awareness of the resulting standards should be developed and implemented in parallel with the standards development process.

Members praised the open and transparent process used over the past year in developing the ISO Strategic Plan 2011-2015, as presented by Sadao Takeda, ISO vice president, policy, and Rob Steele, ISO Secretary-General. According to Mr. Steele's report, the ISO General Assembly will be asked to approve the new strategic plan in September 2010. Jacques Regis, president of the IEC, spoke about updates to the IEC Master Plan, due to be approved in 2011. It will focus on addressing market challenges and expanding the global reach and effectiveness of IEC standards.

Juichi Nagano of the Japanese Industrial Standards Committee (JISC) was re-elected for a second, three-year term as PASC secretary by acclamation.

Preceding PASC 33, MASM hosted a workshop on Technical Regulations and the Role of Standards. Several PASC members delivered presentations, and approximately 150 people were in attendance from Mongolian companies and government agencies.

"PASC is a most unique organization when it comes to being a regional standards body that doesn't develop regional standards, but instead its members are urged to take up international standards for their national use," said Doug Durant of Deere & Company, chairman of the ANSI Regional Standing Committee on Asia Pacific. "As proven by the warm hospitality of our Mongolian hosts and the excellent engagement of all those present, the PASC family is a special one that continues to add value to its members." 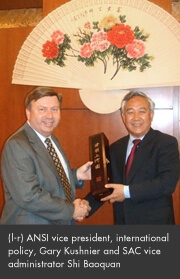