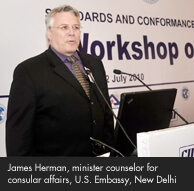 The American National Standards Institute (ANSI), in cooperation with the Confederation of Indian Industry (CII) and the Bureau of Indian Standards (BIS), convened the fourth in a series of workshops held under the U.S.-India Standards and Conformance Cooperation Program (SCCP). The workshop focused on biometrics technology, the relevant international standards, and their application in support of national priorities in the U.S. and India. The workshop was held at the Taj Mahal Hotel in New Delhi on July 22, 2010.

The event was co-sponsored by Purdue University and marks the fourth sector-specific workshop carried out under the U.S.-India SCCP. The SCCP, which was launched in March 2009 [see related news item], is a cooperative initiative designed to improve access for U.S. companies to the Indian market boosting cooperation on standards and conformance issues.

Approximately 90 representatives of U.S. and Indian organizations participated in discussions throughout the day on topics such as biometrics technology and standardization, case studies in biometric technology application, the biometrics testing landscape, and opportunities in Indo-U.S. trade.

Speakers from the National Institute of Standards and Technology (NIST) and Daon, a global biometric identity management company, provided an overview of U.S. participation in biometrics standards activities, and Rajesh Mashruwala delivered an introduction to the Unique Identification Authority of India (UID). The UID program in India is slated to begin issuing identification numbers to Indians in August 2010, and will utilize biometrics technology and products such as those developed by Daon and other U.S. companies.

The remaining SCCP workshops are planned for later this year on the topics of solar photovoltaic technologies and plumbing.

Save the Date: Ninth ANSI-HSSP Plenary Scheduled for November 9-10