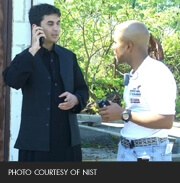 Now You're Talking My Language! NIST Evaluates Translation Devices for the U.S. Military

Communication overseas between members of the U.S. military and non-English speakers is getting easier thanks to new translation technologies being evaluated by scientists at the National Institute for Standards and Technology (NIST). With the help of standards, speech recognition and translation systems like these are becoming more adept at facilitating communication across language barriers.

In the past, the military has relied on human translators for communicating with non-English speakers in foreign countries; but the job is dangerous and skilled translators are not always available. To provide an alternative, scientists at NIST have been conducting detailed performance evaluations of speech translation systems for the Defense Advanced Research Projects Agency (DARPA). In these systems, an English speaker talks into a phone. Automatic speech recognition distinguishes what is said and uses software to translate it to a text version in the target language. Text-to-speech technology converts the resulting text file into an oral response in the foreign language. This process is reversed for the foreign-language speaker.

Standards have contributed to the development of many of the technologies that enable speech translation systems like those being evaluated by NIST researchers. One International Standard, IEC 60645-2 Ed. 1.0 b:1993, Audiometers - Part 2: Equipment for speech audiometry, relates to the speech recognition capabilities the devices require. The standard specifies requirements for audiometers designed to provide a means of presenting speech sounds to a subject in a standardized manner - for example, for the measurement of speech recognition. This standard was developed by the International Electrotechnical Commission (IEC) Technical Committee (TC) 29, Electroacoustics. The U.S. National Committee (USNC)-approved Technical Advisory Group (TAG) administrator is the Acoustical Society of America (ASA), a member and accredited standards developer of the American National Standards Institute (ANSI).

Sensitive microphones are another key element of many speech recognition devices. IEC 60268-4 Ed. 4.0 en:2010, Sound system equipment - Part 4: Microphones, was developed by TC 100, Audio, video and multimedia systems and equipment. The chairman of TC 100 is Mark Hyman of the Society of Motion Picture and Television Engineers (SMPTE), an ANSI member and accredited standards developer. The Consumer Electronics Association, also an ANSI member and accredited standards developer, serves as the USNC-approved TAG Administrator to TC 100, carrying U.S. positions forward to the Committee.

Once messages have been translated into another language, devices must relay them to the other party in an intelligible way. ANSI S3.5-1997 (R2007), Methods for the Calculation of the Speech Intelligibility Index, defines a method for computing a physical measure that is highly correlated with the intelligibility of speech as evaluated by speech perception tests given a group of talkers and listeners. This American National Standard was developed by ASA.

As improvements are made on these critical devices for the U.S. military, standards are in place to promote the necessary technology that helps get the message across. For more information, see the NIST news story and video.

U.S. Participation Sought for TAG on Energy Efficiency and Renewables