The American National Standards Institute (ANSI) honored leaders of the U.S. and global voluntary standards-setting and conformity assessment community last week at the 2010 ANSI Awards Banquet and Ceremony. Held annually, the leadership and service awards program is a long-standing tradition that recognizes and honors creativity, dedication and vision in the field of standards and conformity assessment.

The event, held at the Sheraton National Hotel in Arlington, VA, was one of many ANSI-sponsored events held in conjunction with the celebration of World Standards Week 2010.

Ileana Martinez, standards specialist, global standards and information group at the National Institute of Standards and Technology, was awarded the Astin-Polk International Standards Medal, which honors distinguished service in promoting trade and understanding among nations through the advancement, development, or administration of international standardization, measurements, or certification.

Frank K. Kitzantides, senior technology advisor at the National Electrical Manufacturers Association, received the Howard Coonley Medal, which recognizes an executive who has benefited the national economy through voluntary standardization and conformity assessment and has given outstanding support to standardization as a management tool.

Albert (Chip) Pudims, retired manager, codes and standards and product liability at Bryant Electric/Hubbell Inc, received the Finegan Standards Medal, which honors an individual who has shown extraordinary leadership in the development and application of voluntary standards.

Gerald H. Ritterbusch, retired director of standards and regulations at Caterpillar, received the first-ever Gerald H. Ritterbusch Conformity Assessment Medal, which bears his name and honors distinguished service in promoting the understanding and application of conformity assessment methods as a means of providing confidence in standards compliance for the marketplace.

Charles C. Packard, chairman emeritus at the Electronic Components Certification Corporation, was awarded the Elihu Thomson Electrotechnology Medal, which honors an individual who has contributed in an exceptional, dedicated way to the field of electrotechnology standardization, conformity assessment, and related activities at the national and international levels.

George Arnold, national coordinator for Smart Grid Interoperability at the National Institute of Standards and Technology, received the George S. Wham Leadership Medal, which honors an individual who has made outstanding contributions to the voluntary standardization community and provided long-term direction and visionary qualities in support of the ANSI Federation.

Scott Adams, creator of the Dilbert cartoon, was chosen as the recipient of the President's Award for Journalism, which recognizes a journalist whose work helps to illuminate the role that standardization and conformity assessment activities play in improving the health and safety of Americans and in strengthening the competitiveness of U.S. business in a global marketplace.

Members of the APEC Toy Safety Initiative, a group formed to improve the alignment of international toy safety standards and conformity assessment practices while reducing technical barriers to trade, were selected as the recipients of the Chairman's Award, which honors outstanding accomplishments by any group or individual on behalf of ANSI or the ANSI Federation.

Kristin Collette and Megan A. Hayes both received the Next Generation Award, which honors individuals who have been engaged in standardization or conformity assessment activities for less than eight years and who have, during this time, demonstrated vision, leadership, dedication, and significant contributions to their chosen field of activity. Ms. Collette is a fire protection engineer for the National Fire Protection Association. Ms. Hayes is senior manager of technology and standards for the Consumer Electronics Association. 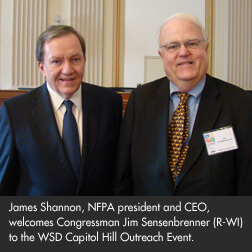