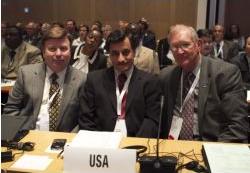 Over 400 delegates from over 120 countries met last week for the 33rd General Assembly (GA) of the International Organization for Standardization (ISO). Held in Oslo, Norway, the event represented the largest number of countries ever to attend the annual ISO meeting. This meeting brings together representatives of ISO member bodies to discuss International Standards and their impact on business, safety, and the global economy.

S. Joe Bhatia, president and CEO of the American National Standards Institute (ANSI), led the ANSI delegation to the ISO GA, accompanied by Robert Noth, formerly of Deere and Company and ANSI ISO Council Chairman, and Gary Kushnier, ANSI vice president of international policy. In addition, ten other U.S. delegates from ANSI membership and staff were in attendance as observers.

"As always, the ANSI delegation was pleased to be a part of ISO's General Assembly," said Mr. Bhatia. "The discussions that we had with our international counterparts were of great value to us as we further our partnerships with standardization organzations across the globe."

During the course of the week, various members of the ANSI delegation met with several of its peer member bodies, including those from the United Kingdom, China, Egypt, the Russian Federation, Saudi Arabia, India, Namibia, Australia, New Zealand, and Japan, as well as with the ISO president-elect, Mr. Boris Aleshin, who will take office as ISO president on January 1, 2011. A variety of subjects were discussed during these meetings related to increased activities between ANSI and its fellow national standards body members of ISO. 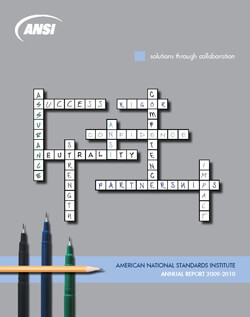