European Parliament Approves Report on the Future of European Standardization

On October 21, the European Parliament approved the Report on the Future of European Standardization - a document aimed at setting a strategic approach for the future of European standards activities. The report was developed by the Parliament's Internal Market and Consumer Protection Committee (IMCO).

According to the report, the European standardization system must "contribute to European innovation and sustainable development, enhance the Union's competitiveness, strengthen its place in international trade, and benefit the welfare of its citizens." The report aims to build on the strengths of Europe's existing system while avoiding changes that would undermine the system's core values.

The document urges the Commission to adopt and submit a proposal for a modern, integrated standardization policy capable of responding to societal and economic needs.

The report took into consideration various surveys, studies, public hearings, and assessments, including a public consultation period and the Expert Panel for the Review of the European Standardization System's (EXPRESS) report: Standardization for a competitive and innovative Europe: a vision for 2020.

The two-month public consultation drew 483 responses from a stakeholders around the globe, including the American National Standards Institute's (ANSI) International Policy Committee (IPC). 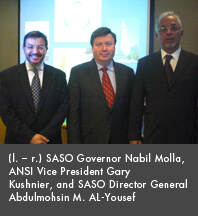