A Federal Register notice issued today by the National Institute of Standards and Technology (NIST), on behalf of the National Science and Technology Council (NSTC) Sub-Committee on Standards (SOS), invites interested parties to provide their perspectives on the effectiveness of federal agency participation in the development and implementation of standards and conformity assessment activities and programs.

The input received will inform the development of case studies examining the effectiveness of federal agency participation in standard-setting efforts led by the private sector. The Sub-Committee seeks to develop information on how Federal agencies may engage more effectively in the U.S. standardization system in a manner that is consistent with the National Technology Transfer and Advancement Act of 1995 and the Office of Management and Budget Circular A-119. Comments to NIST are due by February 7, 2011.

As the coordinator of the U.S. standards and conformity assessment system, the American National Standards Institute (ANSI) will develop a consensus response on behalf of the standardization community. ANSI members and other interested stakeholders are encouraged to send comments for inclusion by January 14, 2011.

Issues impacting U.S. competitiveness, such as the interplay of standards with intellectual property, competition, and innovation, are also significant considerations.

The Sub-Committee seeks perspectives on:

To Submit Comments for ANSI Federation Response
Comments should be submitted by January 14, 2011, to nstccomments@ansi.org with the subject line "Feedback for Sub-Committee on Standards."

To Submit Comments to NIST
Comments should be sent by February 7, 2011, to SOS_RFI@nist.gov with the subject line "Standardization feedback for Sub-Committee on Standards."

For a history of ANSI's engagement with the NSTC, see the following news items: 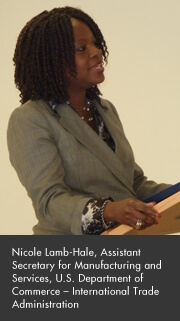