The Standards Council of Canada (SCC) has submitted a proposal to the American National Standards Institute (ANSI) for a new field of technical activity within the International Organization for Standardization (ISO) on carbon capture and storage. ANSI invites all interested stakeholders to submit comments on the proposal by Friday, March 25, 2011.

According to the proposal, industry and governments around the globe have named CCS a priority, calling for commercial projects to be initiated as soon as possible. However, the widespread commercial implementation of CCS has not occurred for several reasons, including cost, concerns about health and safety, lack of carbon pricing, and a dearth of clear regulations and standards.

As a cross-cutting issue, CCS touches on the fields of oil and gas, groundwater quality, GHG management, air quality, geology, electricity generation, and risk management. Because CCS is a relatively new technological field, the SCC proposal states, few countries have developed the necessary framework for CCS regulations and standards. International standardization in the CCS field would provide a necessary foundation that could be used to facilitate widespread implementation.

Standards for equipment and materials used in drilling, production, and transport by pipelines already covered by ISO Technical Committee (TC) 67, Materials, equipment and offshore structures for petroleum, petrochemical and natural gas industries, would be excluded.

All interested parties are invited to submit comments on the proposal, including whether ANSI should support and co-sponsor the new field of activity, to Steven Cornish, ANSI senior director for international policy (isot@ansi.org) by close of business on Friday, March 25, 2011. All input received will be compiled and considered in the development of a recommended ANSI position, which will then be presented to the ANSI ISO Council (AIC) for formal review.

ANSI has published an explanatory information document outlining the process used to develop U.S. positions on issues and activities under consideration by ISO and IEC. Click here to download the document.
Previous Article

U.S. to Celebrate World Standards Day 2011 with a Focus on Advancing Safety and Sustainability Standards Worldwide 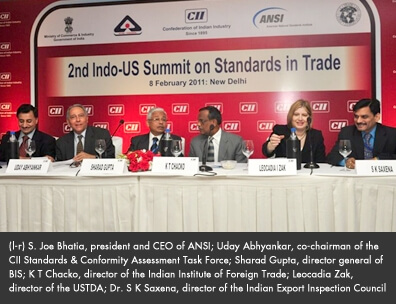