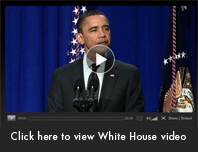 A champion of standardization, Mr. Brown is recognized for breaking down barriers to democracy and trade around the globe. He was killed in a plane crash on April 3, 1996, while leading a trade mission to the former Yugoslavia.

"Ron Brown embodied the values and the ideals, that sense of possibility, that is at the heart of the American story," remarked Mr. Obama in his dedication speech.

In recognition of Mr. Brown's contributions to advancing U.S. trade through standardization, the American National Standards Institute (ANSI) and the World Standards Day Planning Committee honor his memory each year with the prestigious Ronald H. Brown Standards Leadership Award. Presented annually during the U.S. Celebration of World Standards Day, the award recognizes demonstrated leadership in promoting the role of standardization in eliminating global barriers to trade.

This year, James M. Shannon, president of the National Fire Protection Association (NFPA), has been selected as the 2011 recipient of the Ronald H. Brown Award in recognition of his outstanding contributions to improving the safety of citizens and the built environment worldwide. He will be honored on Thursday, October 13, 2011, at the Fairmont Washington in Washington, DC. [see related news item]

Standards Help Keep the Beat during Music in Our Schools Month