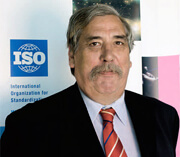 The International Organization for Standardization (ISO) announced today the passing of Michael Smith, secretary of the ISO Technical Management Board (TMB), who had dedicated 32 years of service to the organization.

Mr. Smith died of a sudden heart attack on September 25 in New Delhi, India, where he had been attending a meeting of the ISO Technical Management Board (TMB) and ISO's 34th General Assembly.

"ISO has lost a great person, one who acted with deep knowledge of ISO and what it meant to be part of an organization that can, and is, making a difference in the world," said ISO Secretary-General, Rob Steele. "But more importantly, we have lost a man who had integrity, respect and a wonderful sense of the reality and the humor of the world. We will all miss him."

Mr. Smith served as the TMB secretary since its inception in 1994, during which his exemplary leadership qualities in an international environment were widely recognized. A number of special TMB events were held last week in New Delhi to honor his achievements. On September 19, his TMB colleagues presented him with a souvenir book of personal messages and photos.

Rob Steele contributed an introduction and tribute to the book, from which the following extract is taken:

"Without a doubt, Mike's extensive knowledge of ISO and of the standards business makes him a pivotal force in standardization. He is arguably one of the most knowledgeable people of the ISO community and its inner workings. Ask Mike anything and he will tell you the date, the people involved and the applicable sections of the ISO/IEC Directives. His colleagues fondly refer to him as the 'Wikipedia of the TMB' - and often rely on his profound knowledge and wealth of experience.

"Mike is a great champion of ISO and its growth, and his dedication to the ISO vision has been unfailing. To put it simply, Mike went 'beyond the call of duty' with his time, energy and commitment. His legacy will live on…"

During his tenure, Mr. Smith built a strong team within the ISO Central Secretariat and has been lauded for bringing out the best in those he led. He was also instrumental in contributing to the launch of some of the most well-known ISO standards, including ISO 9000, ISO 14000 and ISO 26000.

"Mike's tireless contributions to standardization have had an enormous impact on numerous industries around the world," said Gary Kushnier, vice president of international policy at the American National Standards Institute (ANSI) and a colleague of Mr. Smith's for nearly thirty years. "He will be sorely missed by many as an esteemed friend and colleague."

Voluntary Standards Cover the Spectrum: from Speakerphones to Portable Ventilation

REMINDER: World Standards Week 2011 Is Less Than Two Weeks Away