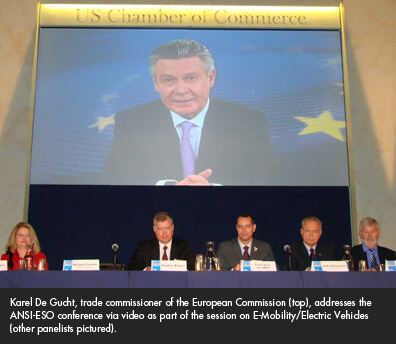 Together, the U.S. and European Union enjoy the largest bilateral trade and investment relationship in the world, generating 3.6 billion dollars per day and sustaining 7 million jobs. Underpinning this relationship is standardization, which plays a critical role in removing barriers to trade, enforcing free trade agreements, and expanding markets for goods and services.

In an effort to forge greater cooperation among the transatlantic economies, the American National Standards Institute (ANSI), in conjunction with the European Standards Organizations (ESOs)—CEN, CENELEC, and ETSI—brought together 150 standards setters and senior policy makers from the U.S. and Europe to discuss standards policy issues essential to the economies on both sides of the Atlantic. Forming the heart of their discussions was the use of standards and compliance programs in the areas of e-mobility/electric vehicles, energy, and security issues.

Co-chaired by Ileana Martinez of the National Institute of Standards and Technology (NIST) and David Dossett of CENELEC, the October 12 conference was held at the U.S. Chamber of Commerce as part of ANSI's World Standards Week 2011 series of events.

"It is clear that the transatlantic trade partnership has never been more important," said S. Joe Bhatia, ANSI president and CEO. "Effective utilization of standards and conformance promotes the global competitiveness of all businesses. Greater transatlantic cooperation and information sharing will improve the bottom line - a top priority in today's economic landscape."

In his introductory remarks, Peter Rashish of the U.S. Chamber of Commerce noted that the Chamber was exceptionally pleased to host this event and recognized the valuable role of standards in advancing EU-U.S. trade.

In a powerful video presentation, Karel De Gucht, commissioner for trade of the European Commission (EC) and co-chair of the Transatlantic Economic Council (TEC), underscored the major significance of the day's meeting as the beginning of an important dialogue and stressed the urgency of U.S.-EU coordination in electric vehicles standardization. E-mobility, Mr. De Gucht stated, offers enormous opportunities for economic and job growth, and both economies have set ambitious goals for wide scale deployment of electric vehicles. With the stakes so high, Mr. De Gucht called on participants to form a transatlantic e-mobility standardization roundtable to lead transatlantic standardization in this important initiative.

Michael Froman, deputy assistant to the president and deputy national security adviser for international economic affairs with the U.S. National Security Council/National Economic Council and co-chair of the TEC, hailed the conference as a landmark meeting and called for the U.S. and EU to work closely together to avoid unnecessary regulatory barriers. He also urged standards setters to let the government know where federal involvement and support is needed to help drive this high-level priority.

In a session focused on the e-mobility needs of transatlantic business, Stephen Biegun of Ford highlighted the need for joint standards development as well as a clear political roadmap addressing the technological, cost, energy, and market acceptance challenges associated with electric vehicles. Future employment, he said, depends on successfully transitioning transatlantic economies to technologies of the future: there are 13 million automotive-related jobs in the U.S., and 12 million in the EU. Representing the European business perspective, Franciscus van Meel of Audi also called for joint activities in the realm of e-mobility and stressed the importance of getting ahead of the global competition with standards development.

Jack Pokrzywa of SAE International and David Dossett spoke about electric vehicles from the perspective of U.S. and EU standards bodies. According to Mr. Pokrzywa, standardization, policy, interoperability, and infrastructure are key factors to achieving consumer acceptance and market demand.

Energy
With a focus on energy management, Smart Grid, and intelligent transport systems, the second session of the day tackled the global energy challenge. This session was moderated by Philip Piqueira of GE Energy.

Jim Quinn of the U.S. Department of Energy discussed the recently released international standard ISO 50001 for energy management systems and how organizations can incorporate it into their corporate fabric. Bernard Gindroz of the CEN/CENELEC Sector Forum on Energy Management provided an overview of European standardization programs for energy management and current relevant standards to date.

Despite the fact that the electric grid was considered the number one invention of the 20th century, most of us don't think about how we get our electricity. But as George Arnold, National Coordinator for Smart Grid Interoperability at NIST, pointed out, modernizing the grid has become a major priority for governments worldwide. Ralph Sporer of Siemens discussed the International Collaboration EU-U.S. Whitepaper, which outlined common goals and set a path forward for work in this area.

A third focus area led by Bruce Schopp of NEMA and Luis Jorge Romero Saro of ETSI took an in depth look at intelligent transport systems and the standards activities that are paving the way for improved transport safety and reliability.

Security
In a final session focused on security, moderator Dan Bart of Valley View Corporation noted the continued relevance of homeland security and the standards that support it a decade following the 9/11 terrorist attacks. Dr. Bert Coursey of NIST and Anne-Mette Jensen Foreman of the European Commission's Joint Research Centre discussed recent cooperative efforts between the U.S. and Europe to support homeland security, including the November 2010 plenary of the ANSI Homeland Security Standards Panel (HSSP). Ying Ying Lau of CEN/Technical Committee 391, Societal and Citizen Security, discussed the European Commission Mandate M/487 on Security and the need for standards supporting the security of citizens, infrastructure, and borders. Daniel Kimball of SRA International highlighted various standards for supply chain security while John Ketchell of the CEN/CENELEC Management Centre discussed Smart container chain management. On the topic of aviation security, Dr. Lawrence Hudson of NIST addressed X-ray standards for explosives screening systems. In his presentation on CBRNE (chemical, biological, radiological, nuclear, and explosives) standards, Gordon Gillerman of NIST stressed that a U.S.-EU collaborative approach to standards is key.

Presentations from the conference are available on the event webpage.

View a photo slideshow of the event.