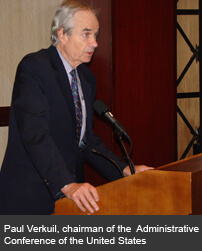 ANSI Board Welcomes Paul Verkuil, Chairman of the Administrative Conference of the United States

The year-end meeting of the American National Standards Institute (ANSI) Board of Directors featured special guest speaker Paul Verkuil, chairman of the Administrative Conference of the United States (ACUS). ACUS is an independent federal agency seeking to improve the administrative process of U.S. government and the rulemaking process through consensus-driven recommendations.

Opening his remarks, Mr. Verkuil noted that the ACUS's approach mirrors ANSI's in its commitment to openness, balance, consensus, and due process, and in its belief in the strength of public-private partnerships. Balance, for example, is paramount when it comes to making appointments to committees, and President Obama has put a sharp focus on increasing transparency and openness in government in an effort to make its activities more accessible to the public.

"Government information itself has a value," explained Mr. Verkuil. "If you push it out rather than hold it back, people will make use of it. It's a public asset."

Mr. Verkuil discussed the challenges facing ACUS in trying to understand how the process can be more open, transparent, and balanced with respect to availability of standards in the electronic age. Noting the value of standards vis-à-vis intellectual property rights and the importance of copyright, Mr. Verkuil mentioned that ACUS would like to find a way to bring openness and transparency to the rulemaking process by making standards available to rule makers, where possible.

To that end, Mr. Verkuil informed the board that ACUS is finalizing a document on incorporations of voluntary consensus standards by reference, which is expected to be finalized later this month and published on the ACUS website. He noted that there was a focus on smart regulations and the use of other resources such as read-only versions of standards on SDO websites to ensure that there is conformity and transparency in regulations.

He also discussed the government's interest in the use of third-party conformity assessment mechanisms. ACUS is planning a workshop early in 2012 focused on increasing participation and regulatory reliance on third-party participation, using the Food Safety Modernization Act as an example. He encouraged ANSI Board members to attend the workshop and to forward any suggestions they may have.

According to Mr. Verkuil, each federal agency has its own culture, character, and motivations, and it is important to realize that ACUS is working with the Executive Branch, government agencies, and the courts. When it comes to agency approaches to standards and conformance, Mr. Verkuil said that ACUS interaction with both ANSI and the Interagency Council on Standards Policy (ICSP) will play an important role.

About Paul Verkuil
Paul R. Verkuil, the tenth Chairman of the Administrative Conference of the United States, was sworn in by Vice President Joe Biden on April 6, 2010. He is a well-known administrative law teacher and scholar who has coauthored a leading treatise, Administrative Law and Process, now in its fifth edition, several other books (most recently, Outsourcing Sovereignty Cambridge Press 2007), and more than 65 articles on the general topic of public law and regulation. He is President Emeritus of the College of William & Mary, has been Dean of the Tulane and Cardozo Law Schools, and a faculty member at the University of North Carolina Law School.