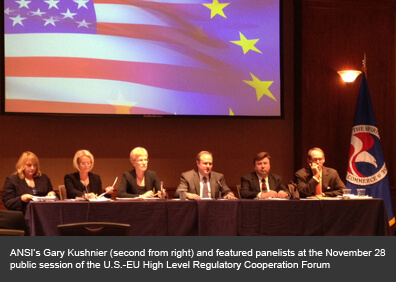 The U.S.-EU High-Level Regulatory Cooperation Forum provides a setting for senior government officials from both sides of the Atlantic to discuss regulatory policy matters of mutual interest and identify opportunities for cooperation on specific sectoral issues. Hosted by the U.S. Chamber of Commerce, the November 28 public session provided a platform for stakeholders to engage in discussions with U.S. and EU officials on the document Building Bridges between U.S. and EU Standards Systems. The document is meant to create new mechanisms to promote cooperation, collaboration, and coherence in standardization with a view towards minimizing unnecessary regulatory divergences and better aligning regulatory approaches to facilitate transatlantic trade.

The public session opened with a readout of the document and a discussion of the suggested future program of work. Mr. Kushnier then participated in a special panel discussion examining the development of the document, visions for moving forward, and its implementation as a new tool. Moderated by Sean Heather of the Chamber of Commerce, the panel included Don Abelson of Sudbury International, who alongside Mr. Kushnier represented the private sector perspective, as well as government panelists Mary Saunders of the National Institute of Standards and Technology (NIST) and Liliana Brykman of the Directorate General for Enterprise of the European Commission (DG ENTR).

The panelists also considered the document in relation to two reports issued earlier this year by the European Commission and the White House respectively: A Strategic Vision for European Standards and Federal Engagement in Standards Activities to Address National Priorities. [see related news item]

The public session also featured briefings by Michael Fitzpatrick, associate administrator of the Office of Information and Regulatory Affairs within the Office of Management and Budget, Heinz Zourek, director general of DG ENTR, and Michael Camuñez, assistant secretary for market access and compliance at the International Trade Administration, U.S. Department of Commerce.