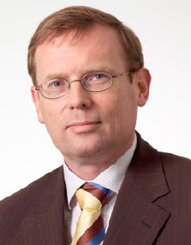 The International Electrotechnical Commission (IEC) has announced that Frans Vreeswijk was approved by the IEC Council as the next General Secretary and CEO of the IEC. Mr. Vreeswijk will join the IEC in March and will succeed Ronnie Amit in the position in October 2012.

Following Mr. Amit's retirement announcement in 2010, a selection committee comprising IEC president Klaus Wucherer, Ph.D., immediate past president Jacques Régis, and former president Sei-ichi Takayanagi, Ph.D., was established to find a successor. After an in-depth evaluation and a challenging selection process due to a very high level of suitability among the candidates, the selection committee recommended that the Council approve the appointment of Mr. Vreeswijk. The recommendation was unanimously supported by the Executive Committee and the Council Board at their October 2011 meetings, and was then approved by the IEC Council.

To ensure a smooth transition, Mr. Vreeswijk will begin his duties as Deputy General Secretary in March 2012, and assume his full role as General Secretary and CEO at the 2012 General Meeting in Oslo, Norway. Mr. Amit will remain available full-time as a special adviser to the IEC president through January 2013, and then on a reduced-time basis until completion of the February 2014 management meetings.

Mr. Vreeswijk is currently president of the Dutch National Committee (NEC) to the IEC, and a board member of the Dutch National Committee (NEN) to the International Organization for Standardization (ISO). He is vice president of the Philips Intellectual Property and Standards (IP&S) organization, responsible for all healthcare activities within IP&S and member of its Executive Management Team (EMT). He previously oversaw all standardization activities within the organization, where he has worked since 2005.

Earlier in his career he worked for many years in the research and consumer electronics divisions of Philips. He was a development manager and member of the management teams for VCRs, New Business, Digital TV, and FlatTV. He holds an MS degree in electrical engineering from Delft University of Technology.

The American National Standards Institute (ANSI) and the U.S. National Committee of the IEC congratulate Mr. Vreeswijk on his appointment and look forward to a productive period under his leadership.