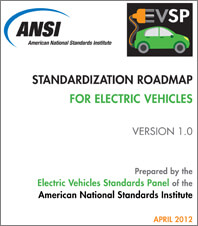 The American National Standards Institute (ANSI) announced today the release of a Standardization Roadmap for Electric Vehicles - Version 1.0, developed by the Institute's Electric Vehicles Standards Panel (EVSP). The Standardization Roadmap assesses the standards, codes, and regulations, as well as conformance and training programs, needed to facilitate the safe, mass deployment of electric vehicles and charging infrastructure in the United States. "The roadmap delivers on its promise to pave a smoother road to the large-scale rollout of electric vehicle technology. And from the economic and environmental points of view, the timing couldn't be better," said Jim Matthews, EVSP co-chair and director of technical standards and standards policy at Corning Incorporated. "EVs offer the potential to significantly reduce our nation's dependence on imported oil, create well-paying jobs through the establishment of a broad, domestic EV industry, and reduce on-road vehicular emissions." Developed by interests in the automotive, electrotechnical, and utilities industries, as well as from standards developing organizations (SDOs) and government, the Standardization Roadmap is intended to: Available for free download, the Standardization Roadmap focuses on plug-in electric vehicles - both full battery electric and plug-in hybrids - and the charging infrastructure needed to support them given current range limitations of plug-in EVs on battery power alone. Standardization issues that relate to consumer adoption, including EV safety, affordability, interoperability, performance, and environmental impact, are considered. Support services, including training of emergency first responders, vehicle technicians, electrical installers, and inspectors, as well as education of authorities having jurisdiction, building owners, and consumers, are also addressed. Targeted toward a broad audience of stakeholders, the Standardization Roadmap identifies standards, codes, and regulations that already exist or that are in development, as well as gaps where new or revised standards are needed, along with related conformance and training programs that respond to those needs. Included are recommendations with prioritized timelines for when standardization should occur, as well as the identification of appropriate SDOs that may be able to do the work. Harmonization efforts already underway or that may be desirable are also discussed. The Standardization Roadmap is supplemented by the ANSI EVSP Roadmap Standards Compendium, a searchable spreadsheet which inventories standards that are directly or peripherally related to each issue identified in the roadmap, while also identifying related issues to which the standards potentially apply. "The release of the Standardization Roadmap for Electric Vehicles - Version 1.0 is a critical step forward in facilitating mass EV deployment in the U.S.," said S. Joe Bhatia, ANSI president and CEO. "This effort relied upon the collaborative work of experts from the public and private sectors and across industries, all focused on the common priority of enabling the EV market to expand and thrive." Work to develop the Standardization Roadmap began in June 2011 and eventually involved representatives from some 80 leading organizations. The majority of work was carried out electronically via seven working groups focused on energy storage systems, vehicle components, the vehicle-user interface, charging systems, communications, infrastructure installation, and education and training. Two plenary meetings were held to identify issues and refine an initial draft of the roadmap in a face-to-face setting. Given the dynamic nature of standardization, and as the ANSI EVSP continues to assess the progress of standards and conformance programs and any gaps requiring further discussion, it is envisioned that the Standardization Roadmap will be periodically updated going forward. In this way, it will continue to serve as a living document to help guide, coordinate, and enhance the standards landscape in support of the widespread deployment of EVs and charging infrastructure. Comments on the content of the roadmap and on next steps for the EVSP can be submitted to evsp@ansi.org, or via a brief online survey. "All of us stand to gain when we work cooperatively to carve out a vision for EV technology in a way that is effective, efficient, and economically beneficial for U.S. industry and safe and effective for consumers," added Jim Pauley, EVSP co-chair and senior vice president of external affairs and government relations at Schneider Electric. "Version 1.0 of the roadmap does just that, but an ever-evolving technology needs an ever-evolving and coordinated approach. We are excited to continue this important work, and I would encourage anyone who downloads and reads the document to give ANSI their comments and feedback." About EVSP
The ANSI Electric Vehicles Standards Panel (EVSP) is a cross-sector coordinating body whose objective is to foster coordination and collaboration on standardization matters among public and private sector stakeholders to enable the safe, mass deployment of electric vehicles and associated infrastructure in the United States with international coordination, adaptability, and engagement. For more information on the work of the EVSP, visit www.ansi.org/evsp.
Previous Article 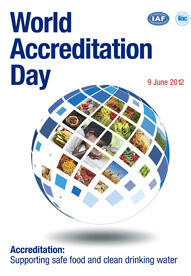