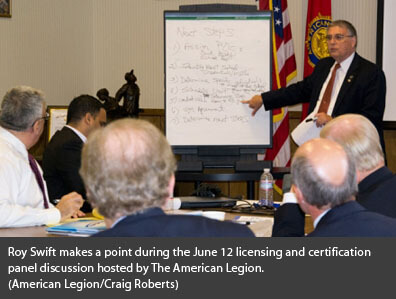 Credentialing Our Soldiers: ANSI Co-Chairs Meeting at the American Legion

United States military personnel receive some of the best training in the nation. But many service members that have been certified in their military occupational career are not licensed or certified to perform a comparable job in the civilian workforce. This situation creates an artificial barrier to employment upon separation from military service.

In an effort to help boost employment prospects for veterans, the American Legion invited the U.S. Army Training and Doctrine Command to meet with officials from private-sector credentialing bodies to discuss how civilian certification and licensing preparation can be integrated into military specialty training.

According to the Legion's meeting summary, appropriate military training curricula could be modified or expanded to include education in the disciplines necessary to pursue the vocation or profession in civilian life. This supplementary training would be funded by the military service, if deemed important to its needs, or by the servicemember's GI Bill educational benefits.

"Matching qualified veterans with credentials creates a high level of professionalism among our service members and veterans, as well as creating a labor pool that is also good for the economy and good for the country," said Steve Gonzalez, assistant director of The American Legion Economic Division.

Co-chaired by Dr. Roy Swift, senior director of personnel credentialing accreditation programs for the American National Standards Institute (ANSI), the meeting was held on June 12, 2012, with more than two dozen attendees, including Lisa Lutz, president of SOLID, LCC, a longtime collaborator in the Legion's veterans employment efforts and a member of the ANSI Personnel Certification Accreditation Committee.

According to Dr. Swift and Ms. Lutz, credentialing contributes to personal and professional career development and enhances the potential of promotion for service members on active duty. While in the service, credentialing results in additional technical and/or managerial competencies that can enhance soldiers' performance.

After military service, credentialing helps demonstrate to civilian employers that training and skills attained in the military are on par with those gained through traditional civilian pathways. Credentialing can also be an incentive for soldiers to stay in the Army.

"We hope this is just the beginning of many meetings to increase communication and develop some formal agreements between the U.S. Army and the private-sector credentialing world," said Dr. Swift. 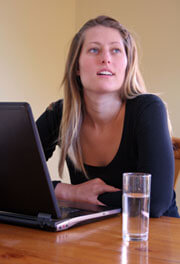