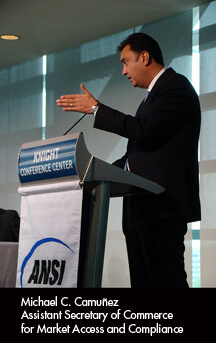 Stakeholders Gather in Washington, DC, for 2012 Open Forum on Standardization

Nearly 80 participants gathered together last week for the 2012 Open Forum: Building Bridges across the Standards Ecosystem. The American National Standards Institute (ANSI) hosted the event on October 9 as part of the Institute's 2012 World Standards Week series of events. The Open Forum is the sixth in a series of annual events that promote dialogue between ANSI and the leaders of both accredited and non-accredited standards developers, as well as representatives of industry, government, and consumer groups.

Michael C. Camuñez, Assistant Secretary of Commerce for Market Access and Compliance, delivered the Open Forum's keynote address, titled "The Role of Standardization in Global Trade and Market Access." He noted that "while the world has largely embraced the benefits of tariff liberalization, protectionism is alive and well," arguing that "the favored mode of protectionism in this era is the manipulation of non-tariff barriers, including especially … standards and conformity assessment issues."

Mr. Camuñez said that he hoped "that Congress will soon act to establish Permanent Normalized Trade Relations with Russia. When it does, we must move quickly to ensure that Russia remains open to adopting and using international standards, including standards developed by U.S.-domiciled standards development organizations." To that end, ANSI and the International Trade Administration (ITA) are working together to conduct outreach to industry regarding the standards and conformance implications of Russia's accession to the WTO, with events to be held in Washington, DC, in the near future.

In his remarks, Mr. Camuñez argued for the creation of "an economic ecosystem that fosters and promotes innovation, drives economic growth, and puts millions of people to work in our own country and elsewhere." He also highlighted positive examples of cooperation between the government, ANSI, and the private sector to address these challenges, such as the U.S.-China Conformity Assessment Project addressing industry issues with Chinese Compulsory Certification (CCC). Assistant Secretary Camuñez's full remarks are available publicly here.

Judy Brewer, the director of the World Wide Web Consortium (W3C)'s Web Accessibility Initiative, presented a case study examining W3C's standards development process, the organization's important work on web accessibility standards, and its partnership with the International Organization for Standardization (ISO) and the International Electrotechnical Commission (IEC). Ms. Brewer said that W3C had become an ISO/IEC Joint Technical Committee (JTC) 1 Publicly Available Specification (PAS) submitter in November 2010 and linked the decision to participate in that program to difficulties that W3C had experienced in getting some countries to accept W3C standards as international standards without the ISO or IEC imprimatur. She said that W3C has a policy of making its standards available royalty-free and had reached an agreement with ISO and IEC to allow standards submitted under the PAS system to remain free.

During the first panel of the day, Building Visibility and Credibility throughout the Standards Ecosystem, speakers emphasized the importance of open dialogue and collaboration between SDOs, consortia, and other stakeholders. Nadine Alameh, the director of the Open Geospatial Consortium's Interoperability Program discussed her organization's ongoing partnerships with consortia and SDOs that worked on related standards and shared common goals. Scott McGrath, the chief operating officer of OASIS, the Organization for the Advancement of Structured Information Standards, argued that common rules are needed to maximize the benefits associated with standards. Claire Ramspeck, director of technology for ASHRAE, called on SDOs to take steps to make sure that they are not replicating existing or in-progress standards and recommended reaching out to other SDOs and consortia when possible. Philip Wennblom, a member of the INCITS Executive Board, praised the PAS process, which he credited with allowing consortia to maintain some control over standards they develop while also reaping the benefits associated with approval by ISO and IEC.

The Forum's second panel addressed Developing Standards for the Global Market. Panelist Russ Chaney, the CEO of the IAPMO Group, told attendees that the adoption of regulations inspired by IAPMO standards in countries overseas had bolstered IAPMO's international conformity assessment efforts. Mark Sheehan, ASME's managing director for development, codes, and standards, said ASME has seen success working with foreign governments and other groups to adopt its standards to local use. Jim Thomas, president of ASTM International, discussed ASTM's focus on the global relevancy of its standards and its increased use of virtual-only standardization events, which help assure the broadest possible participation by stakeholders the world over. Panelist Ed Eckert, the chairman of the board of directors of the Zigbee Alliance, described his group's use of open standards and highlighted its partnerships with SDOs, consortia, and other international stakeholders. Greg Kohn, the senior operations director for the Near Field Communication (NFC) Forum, cited his organization's recent shift in focus from marketing NFC technology to compliance assurance as an example of the flexibility that consortia need in order to succeed in an international context.

S. Joe Bhatia, ANSI president and CEO, concluded the event with remarks praising the flexibility of the U.S. standardization system, and congratulated participants for sharing information and encouraging open dialogue. He told attendees that ANSI had begun the Open Forum with the goal of providing an opportunity for SDOs, consortia, and other stakeholders to meet and share their views and called on all participants to think about ways to improve the Forum in future years.

The program and individual presentations from the 2012 Open Forum are available on the event's proceedings webpage. A slideshow of photographs from the Open Forum is available here.