In July 2012, the President's Council of Advisors on Science and Technology presented President Barack Obama with a report, titled Capturing Domestic Competitive Advantage in Advanced Manufacturing. Prepared by the Advanced Manufacturing Partnership (AMP) Steering Committee, the document is part of an ongoing U.S. government effort to ensure the strength and stability of U.S. manufacturers, an essential part of the U.S. economy. The report, overseen by Susan Hockfield, the president of the Massachusetts Institute of Technology (MIT), and Andrew Liveris, the president, CEO, and chairman of the Dow Chemical Company, acknowledged the contributions of the Manufacturing Skills Standards Council (MSSC), an American National Standards Institute (ANSI)-accredited certification body, in the creation of a comprehensive model for manufacturing skill credentialing.

The steering committee, which included the presidents of Carnegie Mellon University, the Georgia Institute of Technology, and Stanford University, as well as the CEOs of Procter & Gamble, Intel Corporation, Ford Motor Company, and Johnson & Johnson, compiled the report holding four regional meetings - attended by more than 1,200 stakeholders from industrial, academic and government backgrounds - as part of an effort to obtain wide-ranging input. The committee also solicited advice from experts on advanced manufacturing technology education and policy.

The recommendations included a focus on community colleges as a possible source of training for advanced manufacturing workers; an overhaul of tax, trade, and regulatory policies to make it easier for U.S. manufacturers to compete internationally; a campaign to improve the current image of U.S. manufacturing; and the establishment of a U.S. network of manufacturing innovation institutes, among others.

The report also recommended that the U.S. government encourage a national focus on education and training, assisted by the creation of nationally portable, industry-recognized credentials that would make it easier for manufacturing workers to demonstrate their skills to future employers. The committee praised the MSSC and its work with the National Institute for Metalworking Skills, the Society of Manufacturing Engineers, and others, to create a comprehensive model for manufacturing skill certifications through its participation in the Manufacturing Skills Certification System (MSCS).

The MSSC has worked to develop a nationwide assessment and certification system for production, material-handling and distribution workers that is industry-led and based on federally endorsed national standards. It was accredited by ANSI in January 2012. [See related news item]

"MSSC is proud of this ANSI accreditation," states MSSC Chairman and CEO Leo Reddy, "which is viewed globally as a singular distinction." 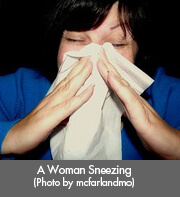 During Allergy Season, Keep Standards (and Tissues) Close at Hand