Two Americans Among the Recipients of 2012 IEC Edison Award

The International Electrotechnical Commission (IEC) recently announced that Americans Karen Higginbottom of Hewlett-Packard (HP) and Kerry L. McManama of Underwriters Laboratories (UL) were among the seven recipients of the 2012 IEC Thomas A. Edison Awards, which honors current officers of the IEC Conformity Assessment Systems and their subsidiary bodies, as well as officers of IEC Technical Committees (TCs) or Subcommittees (SCs). Members of the IEC community from China, New Zealand, Japan, Canada, and the United Kingdom also received Edison Awards. The award, named for renowned U.S. inventor and electrical engineer Thomas A. Edison, was first presented in 2010.

Candidates for the award are nominated by IEC National Committees (NCs), as well as by the IEC general secretary and members of both the Standardization Management Board (SMB) and the Conformity Assessment Board (CAB). The Edison Award honors individuals who have made outstanding contributions to IEC TCs, SCs, or to the conformity assessment community.

Ms. Higginbottom, director of standards strategy at HP, currently serves as the chairperson of International Organization for Standardization (ISO)/IEC Joint Technical Committee (JTC) 1, Information technology. She has been involved with JTC 1 since 1992 and has served as the chair of the InterNational Committee for Information Technology Standards (INCITS), which administers the U.S. Technical Advisory Group (TAG) to JTC 1; the American National Standards Institute (ANSI) serves as the Secretariat to JTC 1. Prior to joining Hewlett-Packard, Ms. Higginbottom led the standards and consortia team at Apple Computer and worked on strategic data communications planning at Pacific Bell.

Mr. McManama, general manager of global hazardous locations at UL, currently serves as the chairperson of the committee managing the IEC System for Certification to Standards Relating to Equipment for Use in Explosive Atmospheres (IECEx). The committee oversees conformity assessment programs for explosion protection-related equipment and repair facilities. Prior to becoming the IECEx Management Committee chairperson, he served as the first U.S. chairman of the U.S. National Committee (USNC)/IECEx committee and as head U.S. delegate to international IECEx meetings.

A complete list of current and past recipients of the Edison Award is available here. 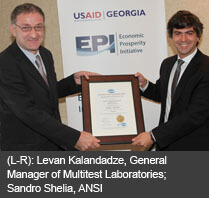