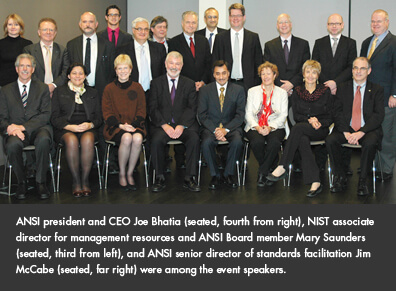 Cooperation on eMobility standardization was the focus of a Transatlantic Roundtable organized by the European Committee for Standardization (CEN), the European Committee for Electrotechnical Standardization (CENELEC), and the American National Standards Institute (ANSI), in Brussels on November 28-29. The event brought together technical experts from industry, government, and other stakeholders from both sides of the Atlantic to compare and discuss standardization priorities for electric vehicles (EVs) outlined in the October 2011 Report of the CEN- CENELEC Focus Group on European Electro-Mobility and the April 2012 Standardization Roadmap for Electric Vehicles - Version 1.0, developed by the ANSI Electric Vehicles Standards Panel (EVSP). Information was shared on cooperative efforts underway among groups involved in EV standardization such as the International Electrotechnical Commission (IEC), the International Organization for Standardization (ISO), SAE International, and Underwriters Laboratories, Inc. (UL). The discussions focused on four key areas: Participants acknowledged that a number of organizations produce globally relevant standards following open, consensus-based processes. While one global standard is the objective, intellectual property, copyright, and commercial issues sometimes result in multiple organizations working on the same or similar issues. Regulatory or infrastructure differences between regions can also result in variations. To prevent the proliferation of conflicting standards, attendees agreed to continue cooperation on promoting and enabling harmonization and alignment of standards. Participants also recognized that governments must play their part by working towards increased harmonization of relevant laws and regulations. The decision to organize the Transatlantic eMobility Standardization Roundtable was prompted by the eMobility work plan put forward by the Transatlantic Economic Council (TEC) in November 2011, and following comments made by European trade commissioner Karel De Gucht and U.S. deputy national security advisor for international economic affairs Michael Froman at an October 2011 ANSI-ESO conference on transatlantic partnerships for economic growth. Mr. Froman remarked, "By working closely on emerging technologies like electric vehicles at an early stage, we can avoid creating unnecessary barriers to trade and investment that many of our countries and their workers face." In response to a request from Mr. Froman to identify standardization priorities for 2013 and how government can help, participants agreed that the priority areas discussed will continue to be the focus next year. In addition to supporting a call for regulatory harmonization to support standardization, participants were also supportive of a proposal he made to leverage the work of the EV-Smart Grid Interoperability Center at the U.S. Department of Energy Argonne National Laboratory and the EU's Joint Research Centre, established as part of the TEC work plan. These two facilities are expected to play a leading role in sharing data and testing methodologies to support EV standardization. Both Mr. Froman and Phillipe Jean, head of unit, sustainable mobility and automotive industry, in the European Commission's Directorate-General for Enterprise and Industry, urged support for two informal working groups on EV safety and the environment that the U.S. and Europe led in creating within the World Forum for the Harmonization of Vehicle Regulations (WP.29 of UN-ECE). This body works to develop global technical regulations for the industry. Mr. Jean reported that the Commission has adopted a CARS 2020 European strategy paper for the auto industry and will propose a legislative measure in 2013 for the EV recharging plug if industry is not in agreement on which standardized option should be applied for plug and socket outlets for dedicated charging stations. He also reported that the Commission recently developed new approval tests to address EV battery safety issues. Andrew McCall, executive director of governmental affairs for Ford of Europe, and a member of the TransAtlantic Business Dialogue (TABD), also called for regulatory harmonization and standardization to help companies reduce costs and create opportunities for the EV market. He applauded the progress made via the TEC process, where Ford, Audi, and the TABD worked with other industry players and public authorities on both sides of the Atlantic to produce the eMobility work plan. He called upon governments to endorse the industry agreement on the combo coupler to facilitate the development of the EV charging infrastructure. CENELEC president David Dossett and ANSI president and CEO Joe Bhatia co-chaired the event. "Much progress has been made since 2009 when CEN and CENELEC and ANSI first started to discuss this issue and there has been a great willingness to work collaboratively," said Mr. Dossett. "This was a highly constructive dialogue to facilitate ongoing cooperation on shared priorities, and will move us closer to global harmonization on EV standardization," said Mr. Bhatia.
Previous Article 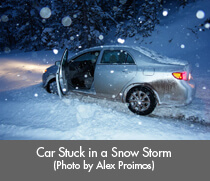 Traveling During the Holiday Season? Standards Will Help Keep You Safe and Warm