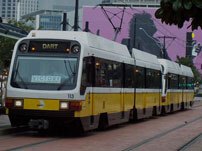 Dallas Area Rapid Transit (DART) today marks the official opening of an 8.4-mile extension of its regional light rail system. The new expansion, which includes extensions of DART's Blue and Orange Lines, increases the size of Dallas's light rail network - already the largest in the U.S. - to more than 85 miles in length. The extension is part of a larger proposed rail expansion linking Dallas-Fort Worth Airport to existing tracks serving downtown Dallas. Voluntary consensus standards play an essential role in ensuring safety and efficiency during the construction and operation of light rail systems nationwide.

In addition, a standard from the International Organization for Standardization (ISO), ISO 14837-1:2005, Mechanical vibration - Ground-borne noise and vibration arising from rail systems - Part 1: General guidance, outlines factors to be considered regarding noise and vibration caused by rail systems and suggests methods of predicting the effects of such operation on sensitive equipment and human occupants of nearby buildings. The International Standard also provides guidance on assessment of damage risks related to rail-triggered vibrations. ISO 14837-1:2005 was developed by ISO TC 108, Mechanical vibration, shock and condition monitoring. The ANSI-accredited U.S. TAG administrator to ISO TC 108 is the Acoustical Society of America (ASA), an ANSI member and accredited standards developer.

A standard developed by ANSI audited designator ASTM International, ASTM A183-03(2009), Standard Specification for Carbon Steel Track Bolts and Nuts, lays out specifications for the track bolts and nuts intended to attach rails to railroad tracks. The American National Standard (ANS) defines two distinct grades of track bolts and nuts, one intended primarily for industrial and mine track use, and another for general track use.

Like many U.S. light rail systems, DART's light rail network includes stations and rail lines that run along or through existing highways. ANSI/IEEE 1570-2002, Interface Between the Rail Subsystem and the Highway Subsystem at a Highway Rail Intersection, establishes performance attributes and defines physical interfaces for highway rail intersections, ensuring that both systems are able to avoid or minimize interference from the other.

While ANSI cannot confirm that all of these standards were used by the new DART system engineers, it is certainly the case that these and other standards help ensure the safety and efficiency of modern light rail systems around the world, both prior to construction and during everyday train operation.