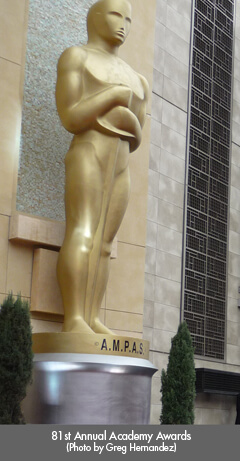 Standards Support the Movie Magic at the 2013 Oscars

Last night, millions of people in the U.S. and around the world tuned in to see who took home the coveted gold statuettes at the 85th annual Academy Awards, also known as the "Oscars." The awards ceremony, held this year at the Dolby Theatre in Los Angeles's famed Hollywood district, honors the best work each year by some of the world's foremost actors, directors, cinematographers, and other film craftspeople. And while the parade of celebrities and tearful speeches at this year's ceremony received most of the attention, voluntary consensus standards have been hard at work behind the scenes, playing an essential supporting role in the U.S. film industry.

Another standard, ISO 26431-1:2008, Digital cinema (D-cinema) quality - Part 1: Screen luminance level, chromaticity and uniformity, provides guidance connected with another recent innovation in the movie world, namely the use of digital projectors in movie theaters around the world. The standard, developed by ISO Technical Committee (TC) 36, Cinematography, specifies the luminance uniformity of reflected screen light and the absolute luminance level, among other factors, for the screening of films using projectors with digital light engines. It applies to both commercial movie theaters and review rooms. The Secretariat of TC 36 is held by the U.S., and ANSI member the Society of Motion Picture and Television Engineers serves as the delegated secretary and associated ANSI-accredited U.S. TAG Administrator.

While films are deeply identified with the moving image, sound plays a major role in the artistic success or failure of nearly every major motion picture. IEC 60268-4 Ed. 4.0 b:2010, Sound system equipment - Part 4: Microphones, details specific measurement methods for the sensitivity, dynamic range, and directional response patterns of sound system microphones, allowing dialogue, sound effects, and movie music to be clearly heard by movie lovers. The standard was developed by IEC TC 100, Audio, video and multimedia systems and equipment, which is chaired by David Carlton Felland of the Society of Motion Picture and Television Engineers. The Consumer Electronics Association (CEA), an ANSI member and accredited standards developer, serves as the U.S. National Committee (USNC)-approved Technical Advisory Group (TAG) administrator to TC 100.

Location shoots, where filmmakers travel to a real-life location to film scenes for an upcoming movie, have a reputation for technical complications and increased safety concerns. However, even movies filmed on soundstages can pose a threat to actors and crew members if appropriate measures aren't taken to make sure that the set is correctly set up. NFPA 140-2008, Standard on Motion Picture and Television Production Studio Soundstages, Approved Production Facilities, and Production Locations, 2008 Edition, provides comprehensive safety requirements for the design, construction, and operation of soundstages and other associated facilities used in film and television production, bolstering fire safety during filming. The standard was developed by ANSI member and audited designator the National Fire Protection Association (NFPA).

Whether you're a diehard Oscar obsessive who watched the broadcast to the bitter end or an occasional movie watcher who plans to check out one of the nominated films on television or video, voluntary consensus standards help make it possible for you to view the masterful filmmaking celebrated this year and every year by the Academy Awards.