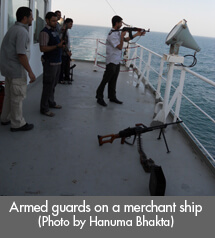 Originally published by the International Organization for Standardization (ISO). In recent years, a rise in the number of piracy attacks off the coast of Somalia and in other pirate-infested waters has cost the global shipping industry billions in ransom payments and lost cargo. These attacks have led more and more vessels to employ armed guards on board to safeguard ship security and minimize interference while in transit. However, the increased number of weapon-toting guards on ships crossing international waters raises noteworthy safety concerns.

The new document, which is the only published International Standard dealing with armed guards on ships, provides guidance to ships selecting armed security service providers, as well as to private maritime security companies. ISO/PAS 28007 outlines operational requirements for casualty management, incident reporting, and investigations, and addresses security management system elements, including resilience, training and awareness, and documentation. The standard also contains sector-specific requirements for applying ISO 28000:2007, Specification for security management systems for the supply chain, to private maritime security companies, allowing compliance to ISO/PAS 28007 to be acknowledged in a certification to ISO 28000.

Retired U.S. Navy Captain Charlie Piersall, who serves as the chair of ISO TC 8, said, "We published ISO/PAS 28007 in record time in order to meet a critical market need. Many ships have already turned to armed guards as a response to piracy, and security guidelines were urgently needed. We were entrusted by the International Maritime Organization (IMO) as the best place to develop the standard with their guidance and participation."

Standards Spiff Up the Place during Spring Cleaning