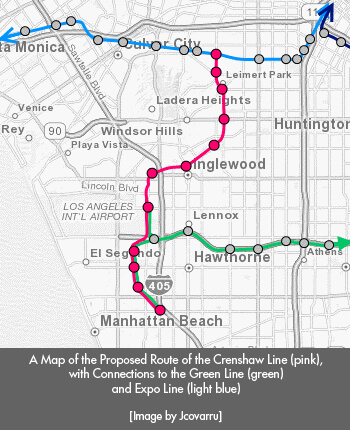 Expansion of L.A. Light Rail System Moves Forward with a Push from Standards

The Los Angeles County Metropolitan Transportation Authority (LACMTA) recently announced that two additional stations will be built as part of the long-planned Crenshaw light rail line, which will run north from Los Angeles International Airport (LAX) through a number of previously train-less neighborhoods of South Central Los Angeles. The 8.5-mile Crenshaw Line is expected to open in 2019. Throughout the planning, building, and operation of these light rail stations, LACMTA can turn to voluntary consensus standards for guidance and other assistance.

A significant chunk of the Crenshaw Line runs in areas lacking existing rail right-of-ways, requiring the trains to run either in road medians, subway alignments, or on elevated structures. An International Standard developed by the International Organization for Standardization (ISO) provides definitions and specifications for steel fiber used to reinforce concrete structures, such as the concrete pillars used elevate the Crenshaw Line and other Los Angeles light rail lines over major intersections and other obstructions. ISO 13270:2013, Steel fibres for concrete - Definitions and specifications, applies to all types of concrete, including precast, sprayed, and repair concrete. The standard was developed by ISO Technical Committee (TC) 17, Steel, Subcommittee (SC) 17, Steel wire rod and wire products. American National Standards Institute (ANSI) member and audited designator ASTM International serves as the ANSI-approved U.S. Technical Advisory Group (TAG) Administrator to TC 17.

The Leimert Park portion of the Crenshaw Line will run through an underground tunnel. ANSI/ASSE A10.16-2009, Safety Requirements for Tunnels, Shafts, and Caissons American National Standard for Construction and Demolition Operations, assures the safety of tunnel construction activities, including environmental control, fire prevention, hoisting, and electrical and compressed air work. This American National Standard (ANS) was developed by ANSI member and accredited standards developer the American Society of Safety Engineers (ASSE).

In order to extend the Crenshaw Line as planned, some businesses may need to relocate and some buildings may be demolished. To assist with work of this sort, ANSI member and accredited standards developer the Acoustical Society of America (ASA) has developed an ANS - ANSI S12.17-1996 (R2006), Impulse Sound Propagation for Environmental Noise Assessment - that helps measure blast noises related to demolition and similar activities.

For years local residents have complained about the lack of connectivity between LAX and the LACMTA's existing Green Line. As part of the Crenshaw Line construction, the Green Line will be extended one stop to access the Crenshaw Line's Aviation/Century station, which is scheduled to have direct access to an automated people mover transporting passengers and workers to LAX via an elevated guideway. IEC 62267 Ed. 1.0 b:2009, Railway applications - Automated urban guided transport (AUGT) - Safety requirements, provides high-level safety requirements associated with driverless urban transport systems, like the proposed LAX people-mover. The standard covers safety requirements associated with the lack of a driver, as well as requirements related to attendant staff. The standard was developed by International Electrotechnical Commission (IEC) TC 9, Electrical equipment and systems for railways. ANSI member and accredited standards developer IEEE's Standards Association serves as the United States National Committee (USNC)-approved TAG Administrator for IEC TC 9.

Despite its international reputation as a city obsessed with cars, Los Angeles has built the beginnings of a world-class rail network over the past 25 years. And with projects like the Crenshaw Line and the assistance provided by voluntary consensus standards, the city looks to be on the verge of a fundamental change in the way its residents get around.