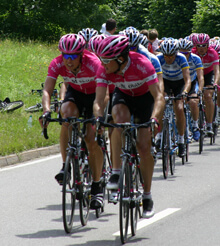 Since its creation in 1903, the Tour de France has grown into the world's most famous bicycle race, pitting 21 teams of top-flight cyclists against each other in a three week-long, multiple-stage competition that transfixes millions of fans worldwide. This year's race - which began on June 29 and will conclude on July 21 - marks the 100th Tour de France, which has been held annually with the exception of 10 years during World War I and II. And throughout the race's many stages, voluntary consensus standards will play an important part in making the Tour de France experience possible for organizers, competing bicyclists, and fans.

As you'd expect, bicycles are central to the race, second only the physical exertions and racing strategies of their riders. And while most of the competitors in the Tour de France make use of specially designed racing bicycles that look quite different than your average mountain bike, the basic elements of both sorts of bicycles are essentially the same. An International Standard, ISO 5775-1:1997, Bicycle tyres and rims -- Part 1: Tyre designations and dimensions, provides general specifications for tires used on a wide variety of bicycles. The standard was developed by International Organization for Standardization (ISO) Technical Committee (TC) 31, Tyres, rims and valves, Subcommittee (SC) 10, Cycle, moped, motorcycle tyres and rims. The American National Standards Institute (ANSI) holds the secretariat of ISO TC 31 and Dale Freygang of the U.S. serves as the committee's chair; ANSI member the Tire & Rim Association Inc. serves as the ANSI-accredited U.S. Technical Advisory Group (TAG) to ISO TC 31 and SC 10. Another standard, ASTM F2711-08(2012), Standard Test Methods for Bicycle Frames, establishes methods for conducting tests of the structural integrity of bicycle frames, with a focus on performance properties related to frame impact strength and frame fatigue from vertical and horizontal loading. This standard was developed by ASTM International, an ANSI member and audited designator.

While the route of the Tour de France changes significantly from year to year, including a wide range of different elevations and sometimes even stretching beyond France's borders into neighboring countries, the roads used for the race are carefully chosen to present a challenge to even the most accomplished riders. And because this year's race will conclude with an unusual night finish in Paris, the lighting used to illuminate the roadways will be of particular importance. ANSI/IESNA RP-8-00, Roadway Lighting (Reaffirmed 2005), provides recommended practices for the design of lighting for roadways, bikeways, and pedestrian paths. This American National Standard (ANS) was developed by ANSI member and accredited standards developer the Illuminating Engineering Society (IES).

The first three stages of this year's Tour de France will take place on Corsica, a French island in the Mediterranean. To make it easier for organizers and members of the press to keep each day's stage nearby, the official race headquarters and press center for this portion of the race have been established on a boat that will move around the Corsican coast. ANSI/ABYC S-8-2010, Boat Measurement and Weight, establishes an industry conformity standard guiding the descriptions of the weight and dimensions of boats. This ANS was developed by the American Boat and Yacht Council (ABYC), an ANSI member and accredited standards developer.

The popularity of the Tour de France has led television broadcasters from around the world to show significant portions of the race live, in addition to normal updates and daily coverage. Assisting television coverage of this sort, as well as a wide variety of other related broadcasts, the Consumer Electronics Association (CEA), also an ANSI member and accredited standards developer, developed ANSI/CEA 109-D-2010, Intermediate Frequencies for Entertainment Receivers. This ANS specifies Intermediate Frequencies (IFs) for use in television broadcast receivers, as well as by AM and FM receivers.

No matter who brings home the yellow jersey, this year's Tour de France is sure to impress cycling fans with its feats of endurance, dramatic rivalries, and sweeping views of the French hills and valleys. And voluntary standards will be along for the ride, helping to make the race and other events like it possible.