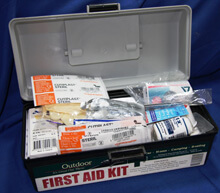 Each September, the U.S. Department of Homeland Security (DHS)'s Federal Emergency Management Agency sponsors National Preparedness Month, hightlighting the importance of preparing in advance for natural disasters and other emergency situations. The American National Standards Institute (ANSI) is pleased to support the 10th annual National Preparedness Month and salutes all those who assist essential pre-disaster planning in a wide variety of important fields and sectors, including the developers of preparedness-related voluntary consensus standards.

A major concern in many disaster scenarios is the possibility of widespread fires and their destructive effect on homes, businesses, and important infrastructure. A standard from ANSI member and accredited standards developer the International Code Council (ICC) covers hazards posed by fire and explosions, and looks specifically at related emergency planning and preparedness. ICC IFC-2012, 2012 International Fire Code, also contains information on useful general precautions, automatic sprinkler systems, and the safe storage of hazardous materials, among other topics.

In emergencies, firefighters are sometimes called upon to take action that can pose risks to their health and personal safety in order to safeguard others, making it all the more important that fire departments ensure that these brave men and women receive effective rehabilitation and medical care after the emergency has passed. NFPA 1584-2008, NFPA 1584: Standard on the Rehabilitation Process for Members During Emergency Operations and Training Exercises, 2008 Edition, provides guidance on developing and maintaining an organized approach when it comes to fire department members and their rehabilitation during emergency work and training exercises. The standard, which was developed by ANSI member and audited designator the National Fire Protection Association (NFPA), includes requirements for medical monitoring during rehabilitation and a sample standard operating procedure for a rehabilitation process.

While the risks posed by a spreading fire are easy (and frightening) to picture, the potential harm caused by the unexpected failure of infrastructure can pose a similar threat. ANSI/AWWA G440-2011, Emergency Preparedness Practices, sets minimum requirements for facilities in the water sector to establish and maintain an acceptable level of emergency preparedness in connection with risks associated with a natural disaster or other emergency. This American National Standard (ANS) was developed by the American Water Works Association (AWWA), an ANSI member and accredited standards developer.

When emergencies occur, hospitals often face special challenges as large numbers of people arrive en masse needing urgent medical attention. While the strain this type of event can place on a hospital may not be entirely preventable, effective preparation can go a long way to keep things running smoothly. ASTM E2413-04(2009), Standard Guide for Hospital Preparedness and Response, provides guidelines for the creation and maintenance of a comprehensive hospital emergency management program, including coordination with federal, state, and local government, and common terminology for hospital emergency management. The standard was developed by ASTM International, an ANSI member and audited designator.

The ability to effectively communicate during natural disasters and other emergencies is essential, though the circumstances of a given emergency often complicates normal communications. ANSI member and accredited standards developer the Alliance for Telecommunications Industry Solutions (ATIS) has developed a standard providing specifications, characteristics, and values for the U.S. Federal Communications Commission's National Security/Emergency Preparedness Telecommunications Service Priority code, which requires telecommunications providers to prioritize the protection and restoration of service to enrolled groups following a disruption. ATIS-0300211.2012, Information Interchange -- Structure and Coded Representation of National Security and Emergency Preparedness (NS/EP) Telecommunications Service Priority (TSP) Codes for the North American Telecommunications System, includes information on allowable code values and ways of determining the relative importance of activities associated with services designated under the code.

In addition to the important work developing preparedness-related standards carried out by members of the ANSI Federation, ANSI has worked to engage with DHS and other relevant entities through the ANSI Homeland Defense and Security Standardization Collaborative (HDSSC). The ANSI-HDSSC seeks to identify existing consensus standards critical to homeland security and homeland defense, as well as assisting government agencies and those sectors requesting assistance to accelerate development and adoption of these sorts of consensus standards. For more information about the ANSI-HDSSC and its activities, please visit its official website.

The ANSI-ASQ National Accreditation Board (ANAB) also does its part for preparedness through its involvement in DHS' Voluntary Private Sector Preparedness Accreditation and Certification (PS-Prep) program. Since 2008, ANAB has served as the accreditation body for the PS-Prep program, which works to improve private sector preparedness for disasters and emergencies by encouraging the creation, adoption, and accreditation to private sector preparedness standards [see related story].To date, the program has adopted three preparedness standards: ASIS SPC.1-2009, Organizational Resilience: Security, Preparedness, and Continuity Management Systems - Requirements with Guidance for Use, which was developed by ASIS International, an ANSI member and accredited standards developer; NFPA 1600, Standard for Disaster/Emergency Management and Business Continuity, developed by NFPA; and BS25999, Business Continuity Management, which was developed by the British Standards Institution (BSI).

Reminder: Less Than a Month Until the 2013 U.S. Celebration of World Standards Day