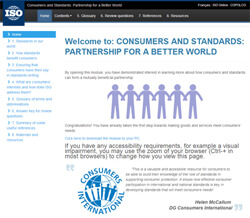 In an effort to engage more consumer representatives in the standards developing process, the International Organization for Standardization (ISO) Committee on Consumer Policy (COPOLCO) has announced an update to its online introductory tutorial, Consumers and standards: partnership for a better world.

The online tutorial was developed in collaboration with Consumers International, a confederation of international consumer groups, and was initially launched in 2009. Over the course of the tutorial, which is designed to take about half a day, users learn important information about how consumers benefit from voluntary consensus standards and how the international standardization system depends in part on input from involved consumer representatives, among other related topics. The tutorial also includes interactive review quizzes and selected reference materials intended to make use of the tutorial easy and informative.

The updated tutorial includes a new section, titled "Practical suggestions for being an effective consumer representative." This section is intended to ease the process of becoming a consumer representative, especially for those who might feel intimidated by standards development work. The tutorial offers guidance on how consumers and consumer representatives should prepare for meetings, as well as information on how to present consumer issues and prepare reports, smoothing their path to involvement in this important process.

"This is a valuable and accessible resource for consumers to be able to build their knowledge of the role of standards in supporting consumer protection," said Helen McCallum, director-general of Consumers International. "It shows how effective consumer participation in international and national standards is key in developing standards that will meet consumers' needs." 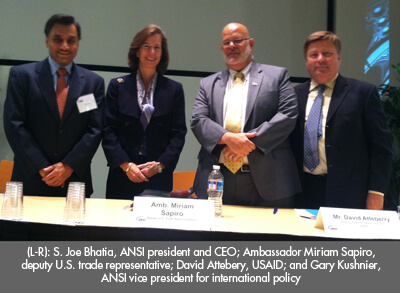