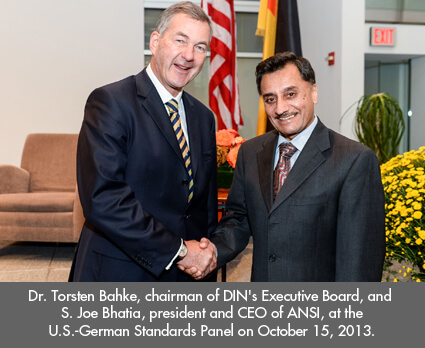 With continued focus on the standards-related aspects of the Transatlantic Trade and Investment Partnership (TTIP), the American National Standards Institute (ANSI) and the German Institute for Standardization (DIN) conducted a U.S.-German Standards Panel in Washington, DC, on October 15, 2013.

The workshop brought together over 50 participants including representatives from German industry and government, as well as U.S. stakeholders.

U.S. and German support for TTIP objectives was a primary focus of the gathering, with topics including the added value of harmonized standards where possible, the importance of resolving unnecessary barriers to the world's largest trade relationship, industry perspectives on standards and conformance, and the role of third-party conformity assessment - including multilateral recognition arrangements - in enabling free trade.

"Standardization matters will play a very significant role in ongoing TTIP discussions, and are expected to have a major impact on the long-term effects of the EU-U.S. trade relationship," said S. Joe Bhatia, ANSI president and CEO, in his opening remarks.

Dr. Torsten Bahke, chairman of DIN's Executive Board, shared statistics from a recent report on the impact of the TTIP, citing a potential increase of over 90% in trade volume between Germany and the U.S.

Attendees noted that the U.S. and European standardization systems are different, but that both areas need to find ways to bridge these differences by increasing mutual understanding and transparency. On October 16, ANSI and DIN continued the dialogue at the third annual bilateral roundtable discussion on German and U.S. priorities for standardization. TTIP remained a priority topic alongside electric vehicles and e-mobility, smart cities, medical devices, capacity building, and the growth of other marketplaces. ANSI and DIN pledged to continue to increase cooperation across these areas of mutual interest.

DIN will welcome ANSI to Germany in 2014 for the fourth annual roundtable.

A photo gallery is available, and ANSI members can access presentations given at the meetings (log-in required). 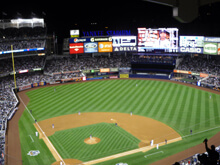