The National Institute of Standards and Technology (NIST) has announced the promotion of Robert Fangmeyer to the position of director of NIST's Baldridge Performance Excellence Program (BPEP). Mr. Fangmeyer, who was named acting director following the June retirement of the previous director, Harry Hertz, will be only the third individual to lead BPEP, which was established in 1987.

Mr. Fangmeyer joined BPEP in 1997 and has served as the program's deputy director, senior staff-program analysis, and supervisory business specialist, among other positions. Prior to joining BPEP, he worked as a human resources specialist at NIST's Office of Workforce Management. Mr. Fangmeyer received his bachelor of arts degree from Pennsylvania's Villanova University and his MBA from the University of Maryland.

NIST, a non-regulatory agency of the U.S. Department of Commerce (DoC), is tasked with promoting U.S. innovation and industrial competitiveness through the advancement of measurement science, standards, and technology in ways that enhance economic security and improve our quality of life. NIST plays an important role in coordinating standards and conformity assessment interests of U.S. federal government agencies. BPEP is overseen by NIST in conjunction with the private sector.

Mr. McCrudden joined ACCA in 2006 and previously served as its vice president of government relations. In that position, he worked to promote the interests of ACCA and its members in the indoor environmental systems industry to the U.S. Congress, as well as relevant government regulatory bodies. Mr. Gotthardt, who was hired by ACCA in 1996, was previously ACCA's director of information systems. In that position, he was responsible for oversight of ACCA's phone and computer systems, as well as related databases and digital security.

ACCA is a non-profit association serving more than 60,000 professionals and 4,000 businesses in the indoor environmental and energy services community across the United States. ACCA sets standards for quality comfort systems and provides education and advocacy for contractors and their employees. 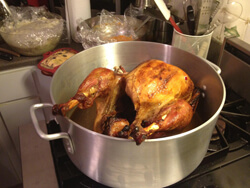