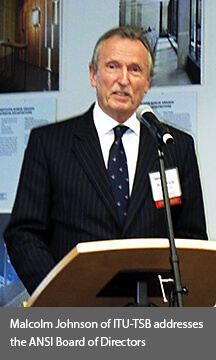 ITU is the specialized agency of the United Nations (UN) for telecommunications and information and communication technologies (ICT). Mr. Johnson described the organization as a "unique public-private partnership," with 193 member states including government and regulatory bodies, 700 private-sector bodies, and 66 universities and other representatives from academia.

During his tenure, ITU-T has increased its activity in a number of key areas, specifically cybersecurity, climate change, and accessibility to ICT for persons with disabilities. Mr. Johnson also described his efforts to bridge the standardization gap by getting more developing countries, universities, and research institutes involved in ITU's standards activities.

Conformance and interoperability are major issues for ITU-T. Mr. Johnson described the organization's conformity assessment programs, which he emphasized are voluntary, and also talked about the importance of establishing test facilities in developing countries, so that these nations can participate effectively in the global telecommunciations and ICT marketplace.

As the convergence of the telecommunications and ICT sectors continues, the traditional lines of scope demarcation between standards developing organizations (SDOs) have been blurred. To avoid the risk of overlap and duplication, Mr. Johnson called on all SDOs - including his own organization - to focus on collaboration and cooperation rather than competition. Further, he suggested that SDOs should work towards common or complementary international standards.

To that end, ITU-T has signed five memoranda of understanding (MoUs) and more than 60 collaboration agreements - not just with its counterparts in the World Standards Cooperation (WSC), the International Organization for Standardization (ISO) and the International Electrotechnical Commission (IEC) - but also with a number of national and regional SDOs and related bodies as part of the Global Standards Collaboration (GSC), which is focused on telecommunications and radio standards.

"I speak for everyone at ANSI in saying that we've truly enjoyed hosting Mr. Johnson and furthering the dialogue between the U.S. standardization community and the ITU," concluded S. Joe Bhatia, ANSI president and CEO. "Our discussions were highly productive and informative, and we look forward to future opportunities to work closely with Malcolm and the ITU." 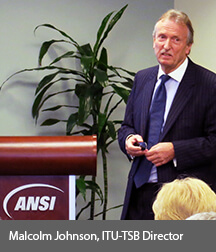