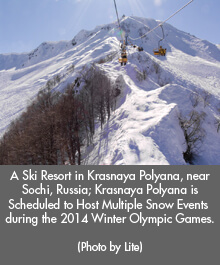 The 22nd Winter Olympic Games begin today in Sochi, Russia, capping years of planning and preparation on the part of national Olympic teams, newscasters, the International Olympic Committee, and the Russian government. With an estimated cost of $51 billion, the 2014 Winter Olympics are believed to be the most expensive games in history, significantly surpassing the $44 billion cost associated with the 2008 Summer Olympics in Beijing. And any time essential infrastructure is being planned, built, and maintained, voluntary consensus standards and codes can play an important role in supporting its safety and effectiveness.

In order to ease travel from Sochi International Airport to the city of Sochi itself, a heavy rail train link known as the Sochi Aeroexpress was constructed in the run-up to the Olympic Games. IEC 61373 Ed. 2.0 b:2010, Railway applications - Rolling stock equipment - Shock and vibration tests, sets down testing requirements for pieces of railroad vehicle equipment subjected to vibrations and other similar shocks in connection with railway operations. The standard was developed by International Electrotechnical Commission (IEC) Technical Committee (TC) 9, Electrical equipment and systems for railways. American National Standards Institute (ANSI) member and accredited standards developer IEEE serves as the U.S. Technical Advisory Group (TAG) Administrator to IEC TC 9.

Prior to its selection as the host city for the 2014 Winter Olympics, Sochi had not hosted an international event of this scale. While buildings and other visible examples of infrastructure tend to garner the most attention when it comes to Olympic preparations, telecommunications infrastructure is essential to allow the full grandeur of the games to be experienced by spectators all over the world. In preparation for the Sochi Olympics, a data and voice telecommunications network based on IEEE 802.1aq, IEEE Standard for Local and metropolitan area networks--Media Access Control (MAC) Bridges and Virtual Bridged Local Area Networks--Amendment 20: Shortest Path Bridging, was created, with the goal of serving the estimated 30,000 Olympic athletes, media representatives, Olympic staff members, volunteers, and others expected to be present at the games. The standard, developed by IEEE, provides specifications for the shortest path bridging of multicast and unicast frames, and covers protocols for calculating multiple active topologies that are capable of sharing learned station information, among other content.

All the media coverage of the Olympics depends on consistent, reliable sources of electricity - as do the various Olympic events scheduled to take place after nightfall or in enclosed athletic facilities. In order to increase the amount of power available during the Olympic Games, a number of power plants were built, including one plant that makes use of combined-cycle technology, which is notable for reducing emissions and consuming less fuel in the production of electricity. ISO 2314:2009, Gas turbines - Acceptance tests, covers open-cycle gas-turbine power plants, closed-cycle and semi-closed-cycle gas-turbine power plants, as well as gas turbines used in combined-cycle power plants like the one constructed for the Sochi Olympics. This International Standard, which does not apply to noise, emission, or vibration testing, was developed by International Organization for Standardization (ISO) TC 192, Gas turbines. The U.S. leads ISO TC 192, with the U.S.'s Benjamin Wiant of Siemens serving as its chair. The U.S. also holds the secretariat of the committee, which ANSI has delegated to Siemens. ANSI member and accredited standards developer ASME serves as the ANSI-accredited U.S. TAG Administrator to ISO TC 192.

While the world's many gifted Olympic athletes and their pursuit of gold is understandably the focus of most Olympic coverage, the many voluntary consensus standards assisting in the creation of Olympic infrastructure and similar projects around the world also deserve a round of applause.