ANSI/ICC 700 was first conceived in 2007 with input from code officials, energy efficiency specialists, home builders, and many other stakeholders, and became an ANS in 2009; it was subsequently updated in 2012. More than 32,000 residential developments and homes have been certified to date as fulfilling the requirements set down in ANSI/ICC 700, including those for site development, indoor environmental quality, and energy and water efficiency.

ICC and NAHB partnered on the first two editions of ANSI/ICC 700, but this agreement will mark the first time that ASHRAE has been involved with this standard. ASHRAE's participation is expected to bring added insight to the standard's revision and to raise public awareness regarding ANSI/ICC 700.

Individuals who are interested in taking part in the development of the new edition of the standard must submit applications to serve on the relevant consensus development committee by Sunday, April 6, 2014. To download the application forms, or to learn more about the planned update of this ANS, visit the National Green Building Standard webpage maintained by NAHB's Home Innovation Research Labs division. 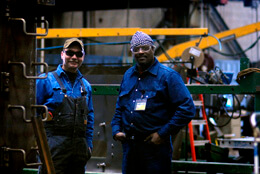