Bruce A. Harding, Professor of Mechanical Engineering Technology in the College of Technology (CoT) and CoT Coordinator of Professional Practice at Indiana's Purdue University and longtime standards professional, passed away on Sunday, February 23, at the age of 66. The American National Standards Institute (ANSI) offers its condolences to his family and friends, as well as his colleagues at Purdue and in the greater standardization community.

In addition to his work at Purdue University, Professor Harding was deeply involved in the U.S. and international standardization community. For much of his career, he assisted in the development of voluntary consensus engineering standards and supported other standardization efforts by donating his time as a member of groups and committees associated with a number of domestic and worldwide standards organizations.

Professor Harding, a former member of the ANSI Board of Directors, served as the chair of the Institute's Committee on Education from 2009 to 2011, and as its vice chair from 2007 to 2008. He also served as the chair of International Organization for Standardization (ISO) Technical Committee 10, Technical product documentation, and its ANSI-accredited U.S. Technical Advisory Group, and was the American Society of Mechanical Engineers (ASME)'s vice president, standardization and testing, from 2010 to 2013.

Professor Harding was a graduate of Purdue University and pursued additional graduate studies at the University of Virginia, Virginia Commonwealth University, and Indiana University Southeast. He is survived by his wife, Martha Jane Harding, and his son, Seth Harding. 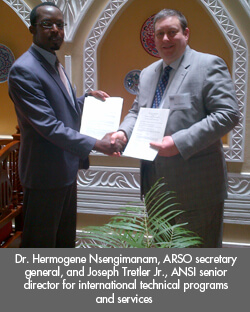