In conjunction with the release of the document, NIST has issued a call for public comment and is asking stakeholders to provide detailed feedback on the document as a whole and in connection with the draft's following notable changes:

The full text of the draft document is available online. All comments must be entered using NIST's Comment Template Form and emailed to scrm-nist@nist.gov with "Comments NIST SP 800-161" in the subject line. The final deadline for comments is July 18, 2014.

Mr. Shannon, who received the award during NFPA's 2014 Conference and Expo in Las Vegas, previously announced that he would retire from his position in June; Jim Pauley, former chair of ANSI's Board of Directors and former senior vice president of external affairs and government relations at ANSI member Schneider Electric will replace Mr. Shannon as president of NFPA [see related story].

The competition required teams to:

The members of the new council serve terms of one-to-three years, allowing the body to maintain institutional knowledge while also ensuring the regular influx of new participants. For more information about the SLAS Americas Regional Council and SLAS' other bodies and activities, visit www.slas.org. 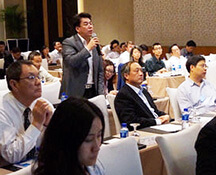