The following is part two of a three part interview. Part one can be found here.

ANSI: Do you think there is cost savings to be found by using standards, and if so, how?

BC: Absolutely. Based on the market modeling and detailed planning I've seen, when the standard reaches maturity, savings should be in the neighborhood of 29% off the cost of a satellite bus. Before maturity, there will be up front expenses for establishing the standards. The profit cross-over point and total savings depends on the number of participants (which drives volume of sales in the lower tiers) and the length of time it takes to build a satellite bus. Analysis shows that cost savings comes from reduced design and system engineering resources to work and re-work interface definitions and from efficiencies in integration and test. Based on cost modeling and anecdotal information from supplier interviews, I also expect up to 55% savings on the cost of manufacturing a component.

Standardizing some interfaces will be easier to establish and will reduce cost sooner than standardizing other interfaces. There are areas of "low hanging fruit" where the U.S. industry can realize early gains. I believe that defining interfaces in a layered software architecture will achieve benefits derived in the near term. These standards would allow increased reuse of software, including the accompanying test infrastructure, and would open up more opportunities for off-the-shelf solutions provided by third parties at lower cost. NASA's Core Flight Software (CFS) illustrates this possibility: it has a software architecture with standard interfaces, which has enabled several NASA centers to reuse the CFS code to support their own mission-specific functionality. CFS is flying or will be flying on dozens of missions, and its demonstrated success is influencing international standards being developed by the Consultative Committee for Space Data Systems and, if adopted by industry, may be an influential component of the SUMO software standard going forward.

The key to closing the business case for developing and implementing standards is sales volume. According to basic economic principles, if the price goes down then sales will go up. The U.S. satellite industry only launches 30 or 40 satellites a year. If the operators, commercial and government, don't unite and support the development of standards then there will not be enough volume to maintain the economies of scale to quickly close the business case.

ANSI: What other benefits have you seen associated with the use of standards?

BC: Interoperability gives a system architect or satellite integrator the ability to easily ingest change. And, significantly, the one thing that is increasing in all industries is the rate of change. Interoperability standards reduce barriers for entering a market, encourage technological innovation, mitigate obsolescence, and simplify adaptability. As can be noted from the effect of standards on the information technology (IT) sector and other industries, one cannot always anticipate all the ways standard interfaces will be applied or the course innovation will run. We've had discussions with the Defense Advanced Research Projects Agency (DARPA) and NASA about their on-orbit repair initiatives; industry-wide interoperability standards would obviously be an enabler for this type of future capability.

ANSI: What other industries or emerging technologies do you think could be particularly aided by the use of standards?

BC: Space may be the final frontier for interoperability standards. The automobile industry has an organization for forming standards, as does the avionics industry, health-care equipment industry, and the wind-generator industry. The Future Airborne Capability Environment (FACE) is a well run consortium to develop standards for unmanned aerial vehicles (UAV) which industry may leverage for space application. The space sector may be the last big industry to develop and establish interoperability standards.

ANSI: Why do you think some companies and organizations are reluctant to use standards, and what might they be missing out on?

BC: Decision making in a corporation is often influenced by return on investment (ROI). Clayton Christensen's book The Innovator's Dilemma explains that a corporation that dominates a market is more likely to continue improving the product that made them successful, whereas the disrupting company will innovate to break into the market. Some companies may be reluctant to change that which is working for them. The government should establish an environment to encourage investments which will drive change through preferential language in request for proposals (RFPs) and through increased use of fixed-priced contracts. Some companies are also concerned that interoperability standards will either limit innovation or create homogenization. The Consortium for Space Industry Standards (CSIS) is a venue where industry can control the invasiveness of a standard so that innovation and differentiation can continue in the market place, and provides the industry a venue to develop consensus based standards.

The government needs to maintain their conviction and utilize standards so that industry's ROI will support investment in standards. Some government missions may require specific interfaces and so standardization may cause sub-optimized performance. If all missions believe that, standardization will not be realized. I believe that the market place has changed. Sequestration had a measureable effect on the current and future fiscal profiles. Not only is there motivation to reduce costs, the vast majority of senior executives in government understand the value of standardization and support interoperability. The government ITT is staffing a letter of intent (LOI) through their organizations to publically convey their intentions.

In a speech recently given by the Director of National Intelligence he said, "You should think about setting standards for things you all do similarly…it can go beyond data, to common interfaces for hardware and software components." He then referred to his office's director of Acquisition, Technology and Facilities who likes to say, "Innovate with a new, exquisite mission system; not with a new, exquisite battery bus." Government and commercial operators spend money on re-designing interfaces because that's the way it has always been done and no other way is available. But if interoperable components were on the shelf, they would use them. Money spent on re-designing component interfaces means less money is available to be spent on the mission; on improving payloads and sensors.

ANSI: We'll conclude this interesting discussion in the third part of our interview. 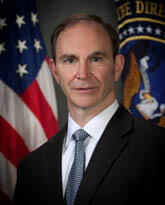