Accredited Standards Committee X9 Inc. (ASC X9), a member and accredited standards developer of the American National Standards Institute (ANSI), has appointed Harden (Steve) Stevens to the position of executive director. Mr. Stevens has served on the ASC X9 Board for sixteen years, during which time ASC X9 successfully transitioned from an organization under the American Bankers Association to an independent non-profit standards association.

Mr. Stevens began his career as an electrical engineer at NCR Corporation, developing a number of single-board computers with on-board encryption and network products, and later playing a lead role in the development of the NCR Tower computer product. As a member of NCR's Corporate Technology Division, he managed internal engineering standards, streamlining the product development process. He was admitted into the federal patent bar in 2003 and practiced patent law for ten years, specializing in computers, point of sale terminals, and automatic teller machines. He established and ran his own patent services firm for three years, and also holds five patents.

ANSI member and audited designator ASTM International has named Katharine E. Morgan as the organization's next president, to succeed James A. Thomas upon his retirement in February 2017. Ms. Morgan currently serves as ASTM's vice president of technical committee operations. She will assume the position of ASTM executive vice president on March 1, 2015, and will work closely with Mr. Thomas until his retirement to ensure a smooth transition.

Ms. Morgan joined ASTM in 1984 as a staff manager and over 30 years assumed roles of increasing responsibility in standards development, rising to her current position in 2007. She is a member of ANSI's Organizational Member Forum, the Council of Engineering and Scientific Society Executives, the International Consumer Product Health and Safety Organization, SES-The Society for Standards Professionals, and the Standards Council of Canada (SCC) Standards Development Organization Advisory Committee.

ASTM International is a globally recognized leader in the development and delivery of international voluntary consensus standards. Today, some 12,000 ASTM standards are used around the world to improve product quality, enhance safety, facilitate market access and trade, and build consumer confidence. 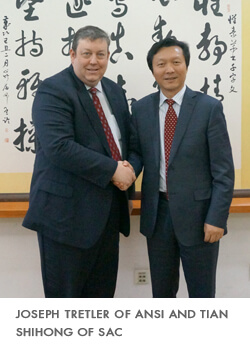