The Woodworking Machinery Industry Association (WMIA) has named Larry Hoffer as its executive vice president. Mr. Hoffer will oversee the organization's day-to-day operations, collaborate with the board of directors to develop programs, and guide WMIA's course for the future. He assumed his role on March 30, succeeding former executive vice president Riccardo Azzoni.

Before joining WMIA, Mr. Hoffer was chief of staff for the Association of Science-Technology Centers. He also served as deputy executive director for the Industrial Designers Society of America, and vice president of programs and operations for the National PACE Association.

One of Mr. Hoffer's goals in his new role is to relocate the organization to the Washington, DC, area. "We want to be where there are services and programs that can be met more readily and obtained for our members," explained WMIA president John Park. "We believe a better and closer proximity to these activities will benefit our members and overall charter as an association."

WMIA, an organizational member of the American National Standards Institute (ANSI), is a trade association for importers and distributers of woodworking machinery and ancillary equipment in the United States. The organization serves as a communications link between suppliers and manufacturers of wood products in North America.

The United States Pharmacopeial Convention (USP) has appointed Jaap Venema, Ph.D., as its chief science officer (CSO). He will also serve as chair of USP's standards-setting body, the Council of Experts, effective July 1, 2015. Dr. Venema will lead USP's scientific and standards-setting activities, and will manage more than 150 staff members around the world.

USP has also announced that Bingbing Feng, Ph.D., has been named vice president and general manager of USP-China in Shanghai. In this role, Dr. Feng will oversee USP operations in China to support standards-setting needs and other allied programs, including management of about 75 staff members.

Dr. Feng has held positions in pharmaceutical and contract research organization (CRO) industries in both the U.S. and China. Prior to his appointment at USP, he was vice president of business development at Alliance Pharma, Inc. He has also worked in operations, business development, global manufacturing and supply, and research and development at Shanghai Medicilon, Inc., in Shanghai.

USP, an ANSI member, is a nonprofit organization that strives to improve global public health through standards for the identity, strength, quality, and purity of medicines, food ingredients, and dietary supplements worldwide. 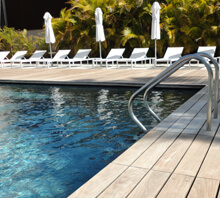 Voluntary Standards Cover the Spectrum: from Pool and Hot Tub Hoses and Tubes to Ladder Accessories