The United Nations Office for Disaster Risk Reduction (UNISDR) will help pioneer International Organization for Standardization (ISO) 37120 in 45 cities committed to implementing the standard for resilient and sustainable cities. ISO 37120, Sustainable development of communities -- Indicators for city services and quality of life, was the first standard published by ISO Technical Committee (TC) 268, Sustainable development in communities.

The announcement was made in Sendai, Japan, last month just prior to the Third UN World Conference on Disaster Reduction. A disaster risk reduction framework aimed at substantially reducing global disaster mortality and impact - with a focus on urban areas - by 2030 was endorsed at the conference. With an estimated 70 percent of the world's population projected to be living in cities by 2050, the role of cities in enabling safer and more sustainable futures is becoming more imperative each year. ISO 37120 includes 100 indicators which steer and measure the performance of city services and quality of life, and measures a city's social, economic, and environmental performance. The standard is being implemented by Toronto-based World Council on City Data (WCCD), UNISDR reports.

UNISDR's Making Cities Resilient Campaign, which in its second phase since launching in 2010, addresses issues of local governance and urban risk. It calls for civil society, planners, and urban professionals, in addition to national authorities and community groups, to develop innovative solutions and engage with local governments to reduce disaster risks. The campaign currently has 2,500 participating cities and towns with a combined population of 700 million, said Margareta Wahlstrom, United Nations special representative of the secretary-general for disaster risk reduction. To heighten the outreach, UNISDR currently has 45 role-model cities that are prepared implement ISO 37120 in a commitment to keep residents safe from natural dangers, including earthquakes, floods, and storms.

UNISDR and WCCD are partnering to ensure that Marking Cities Resilient's "Ten Essentials" checklist will be incorporated into the ISO standard for resilient cities. According to UNISDR, the Ten Essentials focus on key issues such as good urban planning, land-use, a risk-informed citizenry, safe schools and health facilities, protection of ecosystems, early warnings, and emergency management.

In 2014, the American National Standards Institute (ANSI), the U.S. member of ISO, hosted a free webinar that underscored the importance of ISO 31720 for developed and developing economies alike. Interested stakeholders can still access the full webinar recording or view the presentation document.

The ANSI Network on Smart and Sustainable Cities (ANSSC) is a forum for information sharing and coordination on voluntary standards, conformity assessment and related activities for smart and sustainable cities in the U.S. and abroad. Launched in 2014, the ANSSC serves as a one-stop shop where city authorities and others knowledgeable in urban infrastructure planning and sustainable development can engage with ANSI, learn about work taking place in the formal standards process, and articulate their issues and needs. The network convenes via monthly webinars featuring guest speakers with discussion and open information sharing among all participants. For more information, visit www.ansi.org/cities. 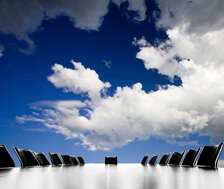