Getting High-Tech with the Help of Standards

Standards have always been a strategic tool for global innovative progress, enabling technology to evolve reliably and safely, from the first PC computers to 3D printing in space. This week, the International Organization for Standardization (ISO) is highlighting the enabling role that standards play in the innovation process through a social media campaign with Twitter hashtag #hitechstandards. As the U.S. member body to ISO and the coordinator of the U.S. voluntary standards and conformance system, the American National Standards Institute (ANSI) continues to prioritize raising awareness about the importance of the role of standards as technology-infused applications continue to grow.

In his recent editorial in the May/June issue of ISO Focus magazine, ANSI president and CEO Joe Bhatia accentuated the role of standards as a foundation for technological innovation in economies, which also includes the growth of smart, sustainable cities. "Research and development costs are lower when tried-and-true standardized methodologies serve as the launching point for technological advancement," Mr. Bhatia emphasized. "Whether industries are firmly established or growing into an emerging sector, standards provide a strong infrastructure for subsequent generations of innovation."

Some emerging areas for high-tech standards include the medical field, including DNA measurement and nano materials. ANSI is dedicated to the growth of these areas as the U.S. member body to ISO. The U.S. Technical Advisory Group (TAG) to ISO TC 229, accredited and administered by ANSI, formulates and delivers U.S. positions and proposals to ISO in all areas of nanotechnology.

Technology is also making an ever expanding impact in the consumer market. Wearable technology—think smart phones, fitness trackers, smart watches— is evolving to the point where consumers rely on such devices that didn't exist a decade ago to fulfill everyday tasks. The ability for these devices to seamlessly interact with other devices, including televisions, computers, and more, is important. An American National Standard (ANS) from ANSI member and accredited standards developer the Consumer Electronics Association (CEA), ANSI/CEA 2014-B-2011, Web-based Protocol and Framework for Remote User Interface on UPnP Networks and the Internet (Web4CE), defines the necessary mechanisms allowing a user interface to be controlled by outside devices or control points and enables the remote display of such interfaces on mobile phones, televisions, and other electronic devices.

Standards are also the foundation for the development of smart cities. Earlier this month, the National Institute of Standards Technology (NIST) and U.S. Ignite hosted the Global City Teams Challenge Expo, which showcased the influence of the Internet of Things (IoT) on Smart Cities, which continues to expand. The ANSI Network on Smart and Sustainable Cities (ANSSC) serves to enhance smart city standardization efforts, serving as a forum for information sharing and coordination on voluntary standards, conformity assessment, and related activities for smart and sustainable cities in the U.S. and abroad.

A new report from the McKinsey Global Institute also highlights how the Internet of Things has great economic potential. It projects that always-connected IoT devices could generate global profits ranging between $4 trillion and $11 trillion by 2025- a figure that only emphasizes why standardization efforts are so critical. Earlier this year, ISO/IEC Joint Technical Committee (JTC) 1, Information Technology, announced the creation of a Working Group (WG 10) that focuses primarily on standardization needs related to the IoT. The U.S. plays a leading role in JTC 1, with ANSI holding the secretariat and Karen Higginbottom Director of standards initiatives at Hewlett-Packard, serving as JTC 1's chair.

"Today, a large amount of America's economic growth comes from industries that barely existed 20 years ago," said Mr. Bhatia. "Those sectors offer the greatest promise for job creation and market expansion that can support the next generation...But their success depends upon continued innovation, and that innovation depends on standards."

ANSI invites all stakeholders to share resources at www.standardsboostbusiness.org, a standards development campaign which offers resources, studies, and other tools for companies, organizations, government agencies, consumers, young or emerging professionals, and students that want to learn more about standards.

Follow ANSI at @ANSIdotorg for the latest developments in standardization. 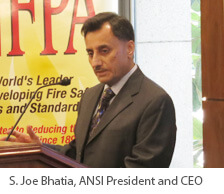