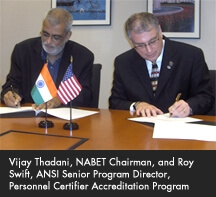 Renewed MOU in Support of U.S.-India Strategic and Commercial Dialogue

The American National Standards Institute (ANSI) has signed a renewed memorandum of understanding (MOU) with the Confederation of Indian Industry (CII).

The MOU reaffirms ANSI and CII's commitment to working together to advance Indo-U.S. cooperation on standards and conformity assessment, all in the service of the U.S.-India Strategic and Commercial Dialogue, a key priority for government leaders in both countries.

Leaders in attendance at the September 22 signing ceremony included:

ANSI members the American Society of Mechanical Engineers (ASME), ASTM International, the International Association of Plumbing and Mechanical Officials (IAPMO), and Underwriters Laboratories (UL) were also in attendance at the event.

The renewed MOU covers planned expansions to the StandardsPortal website, which provides trade and market access information on a number of economies, including India. The MOU also covers plans to foster standards cooperation in a number of sectors, including smart and sustainable cities; renewable energy, particularly solar power; and water and sanitation.

Formal collaboration on standards between the U.S. and India has been ongoing for nearly ten years. In 2006, ANSI and the Bureau of Indian Standards (BIS) signed an MOU, which led to a tri-party agreement in 2007 that brought ANSI, CII, and BIS into close partnership. As a result, with the help of funding contributed by the U.S. and Indian governments, the U.S.-India Standards and Conformance Cooperation Program (SCCP) was established in 2009. And in 2010, ANSI and CII signed their own bilateral MOU, which was renewed in yesterday's signing ceremony.

"By working together on standards and conformance issues, we can help to prevent trade barriers before they arise," said Mr. Bhatia. "By working together, we can and we will facilitate economic growth and competitiveness. As both of our nations look forward to greater opportunities, growth, and innovation, I am both proud and thankful that we have such a robust partnership to help us along the way."

Images from the event are available on ANSI's Flickr page.

ANSI is a private non-profit organization whose mission is to enhance U.S. global competitiveness and the American quality of life by promoting, facilitating, and safeguarding the integrity of the voluntary standardization and conformity assessment system. Its membership is comprised of businesses, professional societies and trade associations, standards developers, government agencies, and consumer and labor organizations. The Institute represents the diverse interests of more than 125,000 companies and organizations and 3.5 million professionals worldwide.

The Confederation of Indian Industry (CII) works to create and sustain an environment conducive to the development of India, partnering industry, Government, and civil society, through advisory and consultative processes. CII is a non-government, not-for-profit, industry-led and industry-managed organization, playing a proactive role in India's development process. Founded in 1895, India's premier business association has over 7900 members, from the private as well as public sectors, including SMEs and MNCs, and an indirect membership of over 200,000 enterprises from around 240 national and regional sectoral industry bodies.

In its 120th year of service to the nation, the CII theme of "Build India- Invest in Development, A Shared Responsibility", reiterates Industry's role and responsibility as a partner in national development. The focus is on four key enablers: Facilitating Growth and Competitiveness, Promoting Infrastructure Investments, Developing Human Capital, and Encouraging Social Development.

With 66 offices, including 9 Centres of Excellence, in India, and 8 overseas offices in Australia, Bahrain, China, Egypt, France, Singapore, UK, and USA, as well as institutional partnerships with 312 counterpart organizations in 106 countries, CII serves as a reference point for Indian industry and the international business community. 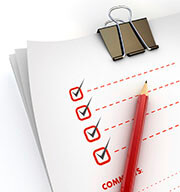