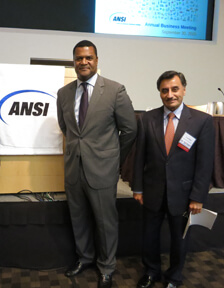 Marcus Jadotte, the Secretary of Commerce for Industry & Analysis for the International Trade Administration at the United States Department of Commerce, served as the keynote speaker at the American National Standards Institute's (ANSI) Annual Business Meeting in Washington D.C. on September 30. Mr. Jadotte addressed an audience of over 100 standardization stakeholders, describing how standards and conformity assessment play a critical role in the digital economy. He highlighted efforts that support a reliable cybersecurity framework and noted collaborative efforts between industry and government that support standardization in emerging areas including the Internet of Things (IoT) and cloud computing.

"Organizations like ANSI help us see around the corners of the innovation cycle," Jadotte said, noting that between one-third and one-half of economic growth can be attributed to innovation—much of which is occurring in the digital environment.

Reflecting on the potential for the U.S. economy, Mr. Jadotte explained how digital growth is expanding at a rapid pace, and acknowledged how standards help support innovation, promote safety and security, and allow the best ideas and technologies "wherever they are developed" to reach customers—both domestically and globally. He asserted that efforts to ensure that standards and conformance measures do not become technical barriers to trade (TBT) are essential. To that end, he described how Commerce supports international standards, namely those developed in the manner consistent with the open and balanced process called for by the World Trade Organization TBT Committee Decision.

The Annual Business Meeting and Luncheon discussion, which was held this year at the FHI 360 Conference Center in D.C., provides ANSI members with an opportunity to hear detailed updates regarding ANSI's activities and initiatives over the previous year, as well as discussion of the Institute's new and continuing priorities in connection with the U.S. and international standardization communities. The event is part of ANSI's annual World Standards Week (WSW) series of events, where members of the standards and conformity assessment community come together in the spirit of cooperation and collaboration.

Mr. Jadotte focused on three areas supporting the growth of the U.S. digital economy, including cloud computing, IoT, and cybersecurity—acknowledging the critical role that standards and conformity assessment play in the fast development in these areas. As the digital economy grows, international standards are needed for cybersecurity, 5G, Smart Cities, and IoT.

A portion of digital economic growth is tied to the IoT, which will be valued at over a trillion dollars worldwide—if not more, by 2020, Jadotte said. Even so, to fully harness the potential of IoT and other related developments, he explained: "We must recognize the fundamental role standards and conformity assessment play in the adoption of technologies around the world," emphasizing that to support technologies that are U.S. based, we need standards that are technically sound, robust, and globally relevant. He said IoT represents the "next frontier" in the digital economy, and is an area where U.S. manufacturers have a potential competitive advantage, but called on stakeholders to contribute to efforts related to developing standards in this area.

Cybersecurity is another critical area that supports the digital economy. Mr. Jadotte noted how national and economic security in every nation depends on a reliable infrastructure, given vast vulnerabilities. Efforts underway include development of an interagency strategy on international cybersecurity standards, led by the National Institute of Standards and Technology (NIST). NIST also convened stakeholders to develop a voluntary Cybersecurity Framework at the request of President Obama. The framework was developed with input from 3,000 people from the U.S. and abroad from various sources, including industry experts, academia, and government agencies, he explained.

At the meeting, Mr. Jadotte also highlighted Commerce Department efforts to engage with key trading partners, noting that Commerce recently hosted the European Commissioner for the Digital Economy and Society Gunther Oettinger, along with delegations of U.S. and EU private-sector representatives to discuss standards in the digital economy.

Marcus Jadotte has served as Assistant Secretary of Commerce for Industry & Analysis for the International Trade Administration at the United States Department of Commerce since December 2014. Previously, he was Vice President of Public Affairs and Multicultural Development for NASCAR. He has also served as chief of staff to both Congressman Peter Deutsch and later to Congresswoman Debbie Wasserman-Schultz, and served in the Clinton Administration at the Labor Department.

Photos from the 2015 Annual Business Meeting are available online.