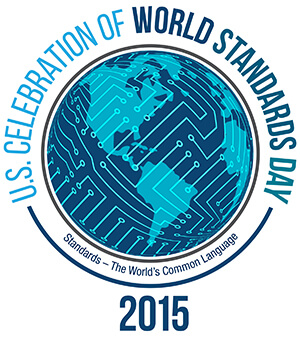 More than 230 members of the standards and conformity assessment community gathered in Washington, DC, on October 1 for the U.S. Celebration of World Standards Day 2015. The exhibition, reception, and dinner marking the occasion focused on the theme "Standards - The World's Common Language."

The event is co-chaired each year by the American National Standards Institute (ANSI) and the National Institute of Standards and Technology (NIST). The Consumer Electronics Association (CEA) served as the 2015 administrating organization.

The evening's festivities included the presentation of the prestigious Ronald H. Brown Standards Leadership Award to electronics engineer and musician James Williamson, for his demonstrated leadership in promoting the important role of standardization through his numerous contributions to standards development during his career.

After early success as a professional musician - including as a guitarist and co-writer for the punk band Iggy and the Stooges - Mr. Williamson took a career turn to electronics engineering. In 1997 he joined Sony, where he served as vice president of technical standards until his retirement in 2009. During his tenure, he was instrumental in codifying numerous nascent industry standards, most notably the Blu-ray Disc.

"World Standards Day celebrations like ours take place all over the world, and the U.S. Celebration is made possible through the efforts of many organizations," said S. Joe Bhatia, ANSI president and CEO. "It is a partnership between those who develop standards and compliance systems, and those who use them. I am proud to be part of a standards community that is diverse, dedicated, and motivated to find solutions and create a better tomorrow."

More information about the U.S. Celebration of World Standards Day 2015 is available at www.wsd-us.org. See the photo album of the event here.