Did You Know? offers a quick look at the broad scope of activities underway within the American National Standards Institute (ANSI) Federation of members and partners, highlighting recent accomplishments and new resources related to standardization.

API and ANGA To Combine into Single Trade Association in 2016

The American Petroleum Institute, an ANSI member and accredited standards developer, has announced that it will join forces with America's Natural Gas Alliance (ANGA) on January 1, 2016. The new organization will use the API name while furthering the missions of both ANGA and API.

API and ANGA are long-time partners in promoting the environmental, job creation, consumer, and energy security benefits of natural gas. Through the new association, ANGA's mission and work will be handled by a new Market Development Group at API. ANGA members will become full API members if they do not already belong to the organization.

The American Gas Association (AGA), an ANSI member and accredited standards developer, has produced a video that recognizes the response of gas utility workers to Hurricane Sandy three years ago.

More than 300 utility workers traveled to the affected areas from their homes in the South, Midwest, and Canada to assist in recovery efforts. They dealt with bitter cold and difficult conditions to restore gas service to thousands of homes and businesses in the days following the storm. Prior to the storm, natural gas utilities collaborated to plan recovery efforts, securing the personnel and equipment that would make service restoration possible.

"The eager response from fellow gas utilities and the systems in place to recover quickly from these types of natural disasters is a testament to the reliability and resiliency of our natural gas delivery system and the men and women that operate it," said Dave McCurdy, president and CEO of the American Gas Association. "The impact of this storm was greater than anyone expected, but our members were standing ready to assist to make sure their fellow utilities had the support they needed to help those affected recover as quickly as possible. This was a real life example of the strength of the natural gas community."

Read more and see the video in the AGA news item.

ABA Identifies Bad Spending Habits to Avoid for the Holidays

The American Bankers Association, an ANSI member, has published a list of seven bad spending habits that consumers should avoid this holiday season in order to minimize spending debt. They include:

To learn more and read all of ABA's suggestions, see the ABA news item.

The American Chemistry Council (ACC), an ANSI member and accredited standards developer, is sponsoring an initiative to encourage Americans to recycle plastics: Plastics Make it Possible. The campaign promotes recycling for American Recycles Day, celebrated on November 15, and throughout the year.

Some of Plastics Make it Possible's recycling tips include:

Consumers can visit plasticsmakeitpossible.com/second-chances to learn more tips and for a chance to win a 16GB iPad Air preloaded with apps and information on plastics and recycling. See the ACC news item for additional information on the campaign. 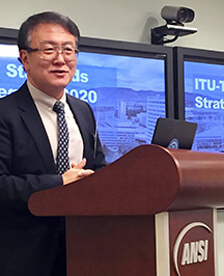