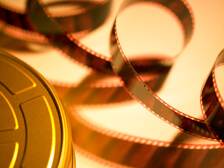 Without technology, the special effects that give life to award winning films would not exist. Recognizing how standards and technology play major supporting movie roles, the Academy of Motion Picture Arts and Sciences (AMPAs) presented the Society of Motion Picture and Television Engineers (SMPTE) a special award plaque for its efforts in nurturing technology, providing essential standards, and offering the expertise, support, tools, and infrastructure for the creation and post-production of motion pictures for 100 years.

SMPTE, an American National Standards Institute (ANSI) member and accredited standards developer, has developed more than 800 standards, recommended practices, and engineering guidelines that effect every part of the motion picture process—and the content consumed by billions of viewers around the world. The award was presented by actors Olivia Munn and Jason Segel at the AMPA Scientific and Technical Awards presentation earlier this month in Beverly Hills.

"One hundred years ago, this organization was founded to support the motion picture industry, helping bring order to the technical chaos of the day," said Ms. Lange. "From determining the size and position of perforations in film to today's work in areas such as high dynamic range in digital cinema, SMPTE's work enables the motion picture industry to thrive the world over."

Student Paper Competition Deadline Is Approaching: Applicants to Exemplify ""A World without Standards""