James A. Thomas, ASTM International president, American National Standards Institute (ANSI) Board of Directors member, and dedicated proponent of voluntary standards development, has been selected by the U.S. Celebration of World Standards Day Planning Committee as the 2016 recipient of the prestigious Ronald H. Brown Standards Leadership Award. Mr. Thomas will be honored by members of the U.S. standards and conformance community during the U.S. Celebration of World Standards Day, which will be held on October 27, 2016, at the Fairmont Washington in Washington, DC. ASTM International is one of the world's largest organizations for the development of international voluntary consensus standards and Administrating Organization of this year's World Standards Day celebration.

Mr. Thomas was nominated for his numerous contributions to standards development and his proactive support of the United States standardization system throughout his 40-year career. As ASTM International president, Mr. Thomas frequently advocates openness and transparency in international standardization and is a staunch proponent of the multiple-path approach to voluntary standards development. Mr. Thomas has also appeared before the World Trade Organization's (WTO) Committee on Technical Barriers to Trade (TBT) to discuss how U.S.-domiciled standards development organizations have embraced the TBT Agreement's Code of Good Practice.

In addition to nearly a decade of service on the ANSI Board of Directors, Mr. Thomas is also a member of the Council for Engineering and Scientific Society Executives, the American Society of Association Executives, and the Industry Trade Advisory Committee on Standards and Technical Trade Barriers.

Mr. Thomas adds the Ronald H. Brown Standards Leadership Award to a significant list of professional industry accolades. He received the Leo B. Moore medal in 2004 for his "Distinguished Contribution to Standardization" from the Standards Engineering Society (now SES - The Society for Standards Professionals), where he is currently a member. He also served as director on the board of the Clinical and Laboratory Standards Institute, which awarded him its highest accolade, the Russell J. Eilers Award, in 2014. In 2015, Mr. Thomas received the ASME Melvin R. Green Codes and Standards which recognizes outstanding contributions to the development, promulgation or management of documents, objects or devices used in ASME programs of technical codification, standardization and conformity assessment. Also last year ANSI awarded Mr. Thomas with the prestigious George S. Wham Leadership Medal, which honors an individual who has made outstanding contributions to the voluntary standardization community and provided long-term direction and visionary qualities in support of the ANSI Federation.

More information about the U.S. Celebration of World Standards Day 2016 is available at www.wsd-us.org. 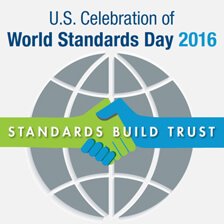