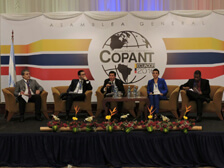 Presentations by American National Standards Institute (ANSI) leadership were among the highlights of the recent Pan American Standards Commission (COPANT) meeting hosted by the Servicio Ecuatoriano de Normalizacion (INEN) in Guayaquil, Ecuador, on April 18-22. The meeting was attended by 80 delegates representing COPANT members, international and regional organizations, and other guests, despite the area's significant earthquake just one day prior. The event highlighted positive outcomes of COPANT internship programs, including the internship on standardization held in neighboring Colombia, which was sponsored by the ANSI/USAID Standards Alliance program.

Joe Bhatia, president and CEO of ANSI and president of COPANT, gave opening remarks and expressed sympathy for all Ecuadorians impacted by the earthquake on April 17.

During the event, the four Working Groups (WGs) that administer COPANT's strategic priorities presented reports of their activities in relation to the 2015 and 2016 strategic plans. The WGs are focused on strategies related to capacity building, international participation, conformity assessment, and regional cooperation.

Joe Tretler, ANSI's vice president of international policy, gave an overview of the current status of the Standards Alliance project during the general assembly. He highlighted the success of the program and its impact on the Western Hemisphere, as well as opportunities for future engagement with COPANT and its members. An example of this includes a future COPANT internship in November 2016, in collaboration with COPANT and DGN, which will focus on conformity assessment. The program will be co-organized, supported, and funded by COPANT and the Standards Alliance.

Other key events included a special session, co-hosted by ANSI, the United States National Committee (USNC) of the International Electrotechnical Commission (IEC), and DGN (Mexico), to gather input from countries in the region on the IEC Master Plan, which is currently under development.

On April 20, ANSI participated in the first speed networking session designed to allow COPANT members to address issues bilaterally. ANSI met with representatives from Peru (in regard to Standards Alliance programs), Ecuador (in conjunction with ASTM, an ANSI member and audited designator, to address ongoing standards/trade issues), and the Standards Attache from Brazil (in relation to the ongoing U.S./Brazil Strategic and Commercial Dialogue).

On April 22, ANSI also hosted a workshop on "Automotive Standards and Regulations in the Americas," which provided an opportunity to share information on the automotive sector, which is a concern for the Americas region as a whole.

The next COPANT meeting is scheduled for April 30-May 5, 2017, as a joint COPANT-PASC meeting, and will be hosted by the Standards Council of Canada (SCC) in Vancouver, British Columbia. The 2018 COPANT meeting will take place in Jamaica.